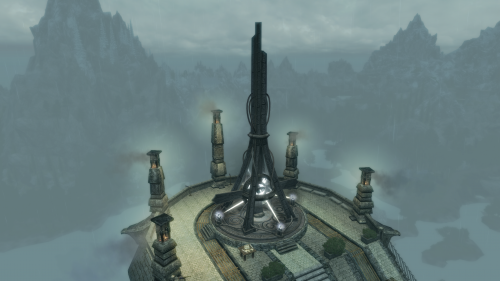 A Beacon is a special device whose exact origin and intent are unknown. It is of key importance to The Cycle.

The Beacon has existed as long as The Cycle itself, which means that its exact origins are unknown. Each civilization has found a Beacon in some form or another from those that came before them, and reconstructed it on their own, eventually leaving it to be found by the next civilization. Since shrouding the nature of the Beacon in mystery is of key importance to the High Ones, not even long-time observers such as The Black Guardian or the Aged Man know about its origin.

In fact, it is possible that not even the High Ones themselves know the origin of the Beacon, since, according to the Veiled Woman, "the High Ones are simply a part of The Cycle, much like the Beacon itself".

Although there have supposedly been innumerable Cycles, each involving their own Beacon, only a few can be seen throughout Enderal:

A Beacon is capable of focusing the energy produced by the Black Stones into its core. If nothing is present at its center, the energy stored in the Black Stones is scattered everywhere, triggering The Cleansing. It is thought that an object called "Numinos" can be placed at a Beacon's core in order to focus that energy and banish the High Ones. However, the only mention of such capability comes from the High Ones themselves, and since making the Emperor search for a Numinos is of key importance to The Pattern, it is possible that no such functionality exists, and the Beacon is simply a device that triggers The Cleansing when activated.