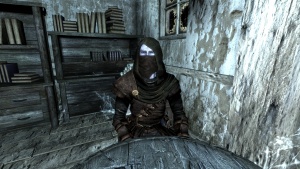 You can begin this quest by asking Tharaêl for more information on Letho before finishing Old Wounds. He will light fireplace in a nearby room and ask you to sit, then begin explaining.

Tharaêl was abandoned at a young age by his family, because they couldn't afford to keep him. Letho, another abandoned child that was only slightly older than him, found and helped him, sharing a bed and food. One year before Letho would be thrown out of The Refuge for being too old, he was abducted by the Rhalâta, together with Tharaêl.

When Tharaêl woke up in the corpse pit, he tried to search for Letho, with no results: He was nowhere to be found. Tharaêl then decided that being alone was the best course of action. According to him, friends and family are liabilities that can be used to hurt one indirectly. Without friends and family, the worst that can happen is death, and without anyone to care for you, no one will be affected by your death: a clean cut, with no consequences.

After that, this quest will end.