here is probably no natural phenomenon, that is as eclectic, fascinating, and misunderstood as magic. This corpus shall provide a rundown over the preliminary findings.

Not much has been handed down of how Asâtoron, the first Aeterna, and the Ash People explained magic. It is known that Asâtoron perceived in the magical talent of the Aeterna evidence that the Aeterna are the inherently higher, superior race. After Starfall and Asâtoron's disappearance, the natives of all continents came up with their own attempts at an explanation. These were often associated with the netherworld or gods of nature.

With the gods' seizure of power, the first serious, scientific examinations on the subject of magic began. The god Saldrin is regarded as one of the pioneers in this field, which is also due to the fact that many renowned arcanists are descended from Qyra.

Since approximately 6000 a. St., there prevails unanimity in the civilized worlds about the mechanics of magic. Indeed, there are scattered wild mages, who provide their own explanations, but these should be ignored by the earnest students of magic. It is solely in the wild world that magic is still handled as a shamanistic, supernatural phenomenon.

The Sea of Eventualities 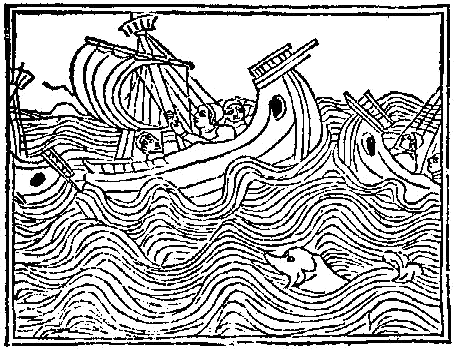 The student of magic must grasp one fundamental truth: Vyn and the universe are just one out of countless realities. From a universe where the water is red and the sky is green, to one in which neither have ever originated, everything imaginable exists simultaneously with our reality. In other words: Every possible event and state of reality exist parallel to what we perceive. Every state of reality that is not ours is termed as an “eventuality,” and the sum of these as the “sea of eventualities.”

Once this is understood, the mechanics of magic are easily explained: Magical talent means the perception of these eventualities, and magical power the ability to bring these eventualities into our reality at one's pleasure. So if an elementalist wants to set a tree on fire, he looks into the sea of eventualities, simultaneous to his reality in which the tree doesn't burn, to another one, in which the tree through a chain of improbable coincidences, bursts into flames. Through vast mental exertion, he brings this element of the eventuality into our world.

The talent of a mage determines how easily he can visualize the different eventualities in his mind's eye, and his actual power — that requires long, long practice — how strong his ability is that allows the eventualities to come true.