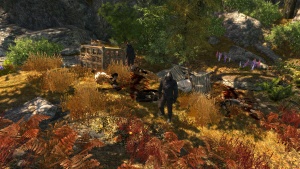 The Petrified and their targets

This quest can be started if you didn't threaten Mendelus at the end of The Long Way to the Top. Talk to the Quartermaster and he'll ask you to deliver a letter to the leader of a caravan currently heading to Ark, Rodas. He informs you that the caravan should be in the Penny Road.

The quest marker will point to the caravan's location on the Penny Road, which is near Old Kingwatch. As you approach the location, you'll find the members of the caravan slaughtered, and two possible suspects dressed in an all-black uniform, Alyx and Davra. After the fight, the two will teleport away before dying. Search the caravan leader and you'll find a Locket of the Golden Sickle in his body, which you can choose to pick up or not.

Return to Mendelus and inform him of what occurred. He will tell you that the two assassins were part of the Petrified, a group of highly-skilled hired assassins. He asks for you to hand back the letter and anything you found in Rodas' body. If you have picked up the Locket in his body, you can lie to keep it. If you have opened the letter before, you can pass a 25 Rhetoric check to persuade him it was in good faith. Either way, he'll give you a Paynote and your contract will end.