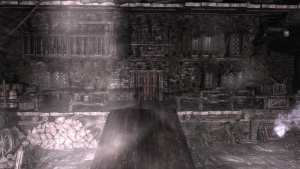 This quest will begin automatically after you give the heart to the First Seer during In Our Shadows. Wait one in-game day and go back to the Undercity. You'll be approached a girl who then gives you a note made by Tharaêl, asking you to meet him in his hideout. Go to the hideout, the same one used in the previous quest, and you'll find Tharaêl there.

Tharaêl will ask if you really killed Sister Pride, and you can choose to say yes or no regardless of your actual actions in the previous quest. If you say you didn't kill her, Tharaêl gets angry and tells you that there's a fifty-fifty chance that The Father will recognize the heart as fake. Either way, he says that you have to wait, but that he wants your help in a personal matter for the time being.

Tharaêl wants your help to infiltrate the Refuge and find papers made by Sha'Gun that confirm or deny that she was willingly selling children to the Rhalâta. Meet Tharaêl in front of Zorkban and Sons then follow him, fighting the hordes of undead that now litter the abandoned orphanage, until he finds Sha'Gun's office. There are no papers related to the Rhalâta in sight, but Tharaêl is certain that they exist, and so he asks you to search for hidden stashes in the orphanage. There is a total of three hidden stashes in the orphanage, but only one contains the quest objective:

After you've found the old book, head towards Tharaêl to hand it to him. When you reach him, however, you'll find him jumping and singing in an old play area. He seems to have reverted to some kind of childhood memory, from when The Father was doing experiments on him and his friends. Eventually, he'll go to sleep and return to his normal self. Give Tharaêl the old book. He remarks that the area must have awoken childhood memories in him, and then laments that Sha'Gun really did sell the children willingly.

Before the quest ends, you'll have the opportunity to ask him for more information on Letho, leading to the Brothers quest. Either way, he says that it can be hours or months until The Father makes his decision, so you'll have to wait until then. This quest will end, and Dark Chambers of our Mind will begin.