Enderal:The Ghost of the Bottle 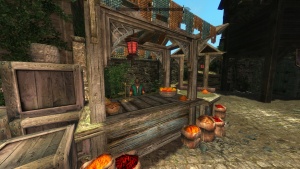 While wandering through the Ark's Marketplace you encounter a merchant from Kilé. He offers you a mystical potion which is supposed to grant special knowledge and power.

You acquire the potion for 200 pennies, it'll take 3 days for it to take effect.

If your Rhetoric is high enough you can call him out at the very beginning, pointing out that the potion is way too cheap for such miraculous effects.

Turns out it was a scam, once you confront the merchant he'll give you your money back and he'll also give you an additional "game penny". A game penny is a symbolical guerdon a Kiléan merchant pays to his customer if they catch the merchant trying to fraud them.