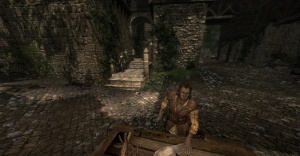 Initial
The locksmith Meogar Ironford seems to be burdened with something. While talking with him he mentioned that a certain "Golfur" has proven that money is all that counts for him in the end. Perhaps I should investigate what this monger did?
After you brought the lute to Meogar
Bella, the daughter of Meogar Ironford who is a locksmith in Ark, recently died of flesh maggots and the only thing she left behind was a locked strongbox - which according to Meogar contains songs and poems of Bella. Unfortunately the box has a special lock which can only be opened by operating the bolts in a certain order. Meogar thinks that Bella - similar like on the back of her lute - made some notes about that order for herself.
After finding both hints
Meogar Ironford was right - Bella left in both the calve close to the harbor as well as the book of poems hints to the order. I should show these hints to him.
Final
With my help Meogar succeeded in opening the box and got the poems. 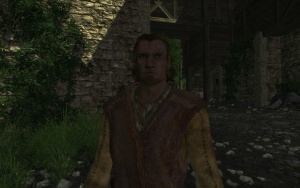 The quest will start automatically once you go past Meogar Ironford. When you strike up a conversation with him, he will comne across as a man stricken with extreme grief and seething with bitter frustration. As a bitter and downhearted person, Meogar will be unwilling to reveal the reasons of his miserable condition,apart from mentioning a man named Golfur. The quest journal will be updated with information to search Golfur's inventory in order to discover the cause of Meogar's foul mood. 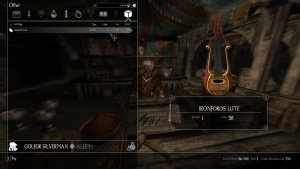 Golfur will be comfortably standing in one of the stalls in Ark, Marketplace. Inform the seller that you want to take a look at his wares and in one of the inventory's section (Other) you will notice an item named Ironford's Lute. Purchase the Lute. The quest log will be updated with the information that now you need to bring the Lute back to its owner, Meogar Ironford.

Bring the Lute Back to Meogar

The position of the balcksmith will be marked by the quest marker. On seeing the Lute, Meogar will open up and start to talk more extensively about himself and why he was so bad-tempered before. He confesses that his life was clouded by the unexpected death of his beloved daughter, Bella, who was so talented that she was predicted to become a bard one day, as she had already written some pieces of poetry. The recovered Lute was infinitely precious to him, something that reminded him of his lost daughter.And yet, when Meogar was not able to pay his debts to Golfur due to being ambushed by bandits and robbed of his belongings, Golfur cared nothing for the Meogar's bereavement and blackmailed him to force him to sell the Lute, which was the reason for Meogar's sheer misery.

The grieving father mentions his daughter's casket, a kind of a treasure chest, in which Bella kept all her songs. Unfortunately, to his utter dismay, the casket is securely locked, and only Bella knew how to open the chest. The thing is, the bolts of the casket have to be opened in a certain order. As you you take a closer look at the Lute, you will notice that there is an inscription carved on the back of the Lute and it says: "left, right, left, down". Thus the inscription revelas the order in which the bolts should be pushed. The father points out there are still two inscriptions missing. He does know where to the rest of the clues are hidden, but he lacks the time to take the matters into his hands. If you are still willing to help Meogar, he will show you where to find the second and third clue. 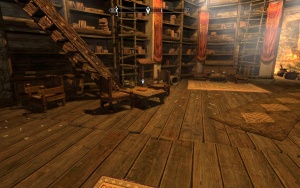 The Clue in the Ark's Library

The second inscription can be found quite quickly and almost effortlessly. It is enough to find the nearest Signposts and teleport yourself to Nobles Quarters. When you are at the Nobles Quarters, search for an imposing bulding, the Library. Inside the Library, the quest marker will show the exact location of the book, which will be lying on a table in the main hall, as shown in the gallery. The inscription on the "Moonshine Ballads" says: right, down, left, up.

Cave at the King's Bay

The Cave at the King's Bay is located in the King's Mountain Pass in Enderal. Go on foot or use one of the Signposts to teleport to Ark,Harbor. When in the Harbor, you will discover that the main road in the harbor will finally lead to an archway offering a view over some wilderness, to the east. Following this path you will reach Cave in the King's Bay, and only a few stray Hungry Wolves will be trying to hinder your journey into the cave. 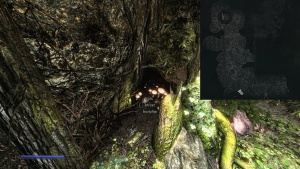 Finding the third inscription in the Cave in the King's Bay is quite straighfortward, as it requires only following the quest marker and fighting a few hairy creatures on the way. The inscription is to be found in one of the rooms, hidden inside a stump. The insription says as follows: down, down, up, left. Interacting with the inscription will update the quest log, and now the task it to go back to Ark and speak to Meogar Ironford.

Meogar Ironford can be found in Ark, most probably he will be waiting for you in fron of his house, Ironford's Metalworking in Foreign Quarters. Impart the news about the inscription to the grieving father and follow him into his dwelling place. Meogar will ask you to witness as he opens Bella's casket using all the clues that have been gathered. Once the casket is open, Meogar will be satisfied with its contents and can finally be at peace. At this point he would love to provide a reward, but since he does not have much money, the choice that he presents is as follows: