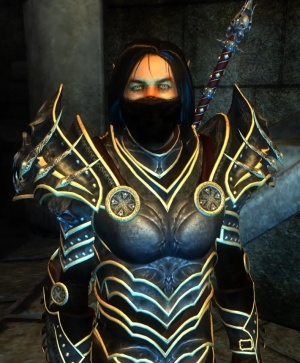 This article is about Arkt's appearance in the game Nehrim. For more information about Arkt, see the lore page here.

Arkt is a Shadow God, and the ruler of the ruined kingdom of Arktwend. He is also called the Fallen Arch-Seraph, the former war marshal of the Gods.

Into the Forsaken Country 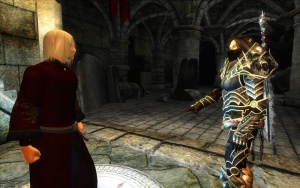 Upon entering the ruined tower of Stormwend, you will hear Arkt's voice welcoming you and introducing himself as the former war marshal of the Gods and current ruler of Arktwend. He tells you and Kim that he has his suspicions on what you are intending to do - that being use the silver plate in the tower - and that you should proceed.

Later on, after contacting Narathzul Arantheal with the silver plate, he will step out of the shadows and begin to converse with Narathzul. The two will begin to argue as their past together gets brought up. Narathzul accuses Arkt of turning his lover against him, while Arkt claims that she left him due to his arrogance and greed for power. Narathzul then ends the connection out of rage, and Arkt will approach you. He says that he is fine with Narathzul resuming his war against the Light-Born, however he warns you of Narathzul's intentions. Afterwards, he will teleport you back to the Sanctum and teleports Kim to the Mountain Monastery.

Soul of the Sword

Narathzul tells his point of view in the story of Arkt, Zelara and himself. The three had been sent on a mission to retrieve the Soul Flayer from its temple. During the expedition, Arkt and Zelara seemed to get closer and at the end she stood on his side. Narathzul, consumed with rage, killed Zelara, and Arkt fled.

As you and Narathzul find the sword in the Soul Flayer Temple, Arkt will appear, seemingly with curiosity about your progress so far. He will greet you briefly and then have a short dispute with Narathzul before leaving.

The Help of the Fallen 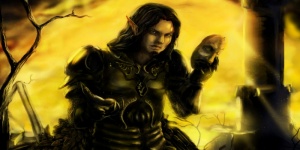 Arkt in the loading screen art for Act V: The Destination of Fate

As you pick up the Sword of Goth in the ruins of Tyrat, Arkt will appear behind you. He will tell you that as you wield the sword, you too have the power to fulfill the Predestination, and warns that Narathzul surely knows this too. He then reveals that he too is a Shadowgod, and would be willing in helping you ascend should you take up the role. He also hints towards Narathzul not being able to fulfil the Predestination.

The Sins of Our Fathers

When it is revealed that Narathzul is the son of Light-Born Irlanda and therefore cannot become Shadowgod, Arkt attacks Narathzul and kills him in a duel. He then tells you that you need to take his role, and instructs that you both need to travel to Inodan to kill the remaining two gods. Since the portals can only by used by the Light-Born, you will have to take the Starlings' airship; and so he teleports you both to their dock.

After traveling to Inodan on the airship, Arkt will leave you to kill the remaining two gods on your own. After taking care of Light-Born Tyr, he will come back and instruct you on how to prevent your death by Predestination - as another Shadowgod taught him before. He leaves you once more, saying that he will stand by you in battle soon enough.

When Sarantha remarks that "No mere Shadowgod can defeat destiny", Arkt will join you at your side. He will fight with you against Sarantha, and once she is defeated he will teleport the both of you back to Nehrim, to Zelara's Tomb.

There, he sits observing the sunrise and speaks of the deeds you have both achieved, and his intentions to retire.

After the quest ends, he will change his outfit and spend the rest of his time residing in the hut near the tomb, as well as tilling the land nearby. If you speak to him afterwards, he will ask you if you like his new clothes and then give you a book summarising your character's story: The History of Vyn and the Shadow God... or my story...