The beginning of the quest. 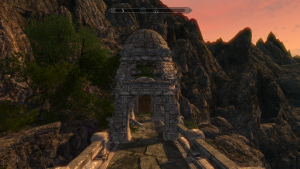 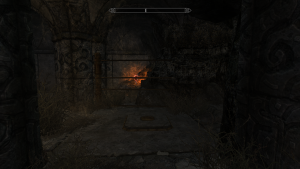 The trap inside the tower. 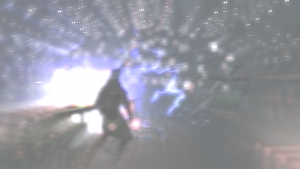 Initial
I found a way out of the derelict temple and got into a gorge - It seems as if I finally arrived in Enderal. Nevertheless I feel weird - Where do these strange abilities which I suddenly have stem from? Magic? This power? Perhaps that dream, that near-death experience which I had before waking up in the bay, is connected to all of that. In any case - I should try to find a way out of this gorge first. Then I will take it from there.

(Optional) Collect Mana fungi to hasten the regeneration of Mana

These plants can be harvested around the area where the quest begins. These are quite visible in the landscape, as plants with pumpkins have big yellowish leaves easily noticeable from a distance.

Find a way out of the ravine

Inside the tower you'll find a trap, activated by a plate on the ground. Be careful not to step on the plate, as it means instant death! You can use the trap to kill the troll to the right if you wish. Right in front of the trap, behind some bars, you'll find a Magical Symbol, Ambrosia and an Old Sword. Leave the tower now through the door on the left.

Find a camp with Finn

Mages may want to take the Life Absorption (Rank I) tome from the dead climber before going down. After following the river a bit more, you'll find two Apothecari, Finn and Carbos. Finn will grant you the Strange Horizons quest.

Before you can go your way, however, you are suddenly stricken by a weird fever.

Talk to the apothecarius about the fever

Simply talk with Finn, the one by the Alchemy Station, and he'll tell you to sit down while he prepares a potion for your fever. Simply look around and you will notice a chair by the fire. Interact [E] with the chair and the quest will continue.

Sit by the Fire

After sitting on the chair, the world suddenly slows down as you see the still Finn was using explode, together with a tangled mess of voices which seem to come from Finn and Carbos. Having drank the potion, however, you find out that the still simply broke, and there was no explosion.

Carbos hears some noise and, while checking it out, he is hit by an arrow. Finn, trying to help Carbos, is hit by an exploding arrow, which causes the same effect as you had seen in the vision before. The explosion throws you and Finn away, and you black out.