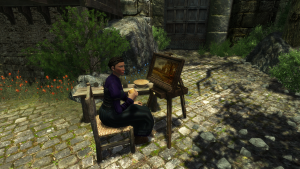 Erica painting for her gallery. 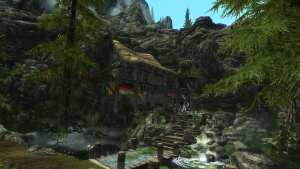 Initial
When I wandered around Ark I met the young gallery owner Erica Braveblood. She seemed upset - I should talk to her and find out the reason for that.
After talking with Erica
When I wandered around Ark I meet [sic] the young gallery owner Erica Braveblood. She seemed upset and upon talking to her I learned the reason for that: Her mother, a distinguished painter, who is mainly drawing paintings of Ark's nobles and is living secluded in the Dark Valley, cut off the content to her daughter months ago. Now the gallery is close to bankruptcy. I offered Erica that I check if her mother is fine in her house.
After talking with Andrasta
Erica's mother Andrasta is in good health. The reason for her silence seems to be a raid at which more than half a dozen of her paintings were stolen. Andrasta wanted me to bring the lost paiting back to her. If I managed to do so she would reestablish the contact with her daughter.
After talking with Rys
I found the stolen painting with a group of marauders in the Throatstone Quarry. Just as I picked it up something strange happened: The painting started to talk. Apparently Andrasta is a psionicist, who is taking law into her own hands out of ideological reasons - by trapping their souls and sealing them into paintings. The man from the painting seems to be a witch hunter from Arazeal who was instructed to kill Andrasta.
After letting Andrasta continue
I decided to let Andrasta continue drawing. Rys, the witch hunter, was completely sealed into his painting. All the remains to be done [sic] is to tell Erica that her mother is fine.
After killing Andrasta
When I confronted Andrasta with the accusations of the witch hunter a fight erupted. Andrasta won't draw another picture, won't kill another person. Now I have to bring her daughter the news of her death - how she reacts remains to be seen.
After completing the quest
As I expected, Erica was upset when I told her about her mother's death. However the amount of nobles in Ark shouldn't suddenly "reduce" anymore in the future - what happens to the gallery remains to be seen.

Andrasta in her painting house. 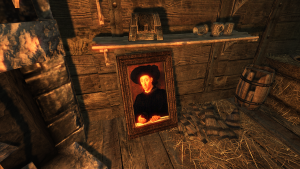 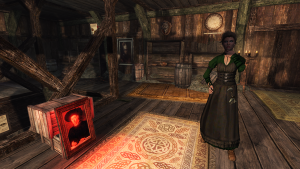 This quest will begin automatically once you hear Erica Braveblood's invitation to her gallery in Ark's South Quarters- Lateral View. Talk to her and accept her request to find her mother.

Follow the quest marker all the way to the Old Watermill. Despite Erica telling you the house is in the Dark Valley, it's easier to reach it from the Forstcliff Tarvern's Myriad Tower than the Dark Valley Myriad Tower. Prepare yourself before entering, because you'll have to face a Fire Elemental. After the defeating the elemental, you'll have a chance to talk with Andrasta. She'll tell you she stopped sending paintings because she was raided, and she wants you to recover one of the stolen paintings.

Follow the quest marker to the Throatstone Processing Plant. You'll have to face some bandits inside, mostly warriors, so be prepared. After dispatching of them and their leader, you'll want to take the painting... only be greeted by something unexpected. After talking with the... "painting", you'll learn that Andrasta is in fact a wild mage that uses her power to trap nobles inside paintings to rid the world of their kind. The man trapped inside, Rys, has asked for your help to stop her.

Confront Andrasta with the accusations

Head back to the Old Watermill and talk with Andrasta. At this point, you'll have two choices.

You let Andrasta continue her "work" and Rys is taken, forever. Choosing to threaten Andrasta into stop killing people only changes the response dialogue. Andrasta will give you:

Andrasta is a formidable foe, so be prepared. After killing her, Rys will be returned to his body and can be found on a newly-opened room on the second floor. You can loot Andrasta and talk to Rys to receive:

Return to Ark and talk with Erica . If you choose to tell her the truth, she will become enraged and tell you to get out of her house. If you choose to lie and tell Erica her mother died because of bandits she will give you 200 Pennies. Either way, the quest completes (2500 EP).