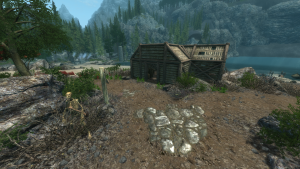 Fleshless Lost One, Awoken Lost One

The Abandoned Cabin is a run-down cabin is situated on a beach. The cabin itself and the area around it are occupied by Lost Ones. There is a small dock with a couple of boats on the shore.

The cabin is occupied by 3 hostile NPCs, which you can fight without alerting the enemies down by the shore. There are also 2 unowned beds you can use here.

The remaining 2 hostile NPCs are here, and there are a couple of chests you can check for loot.