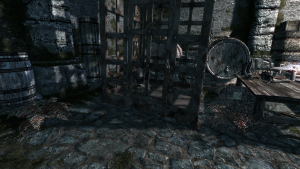 Initial
If there is one thing Ark doesn't lack then it is eccentric personalities: In a small, hidden workshop I met a Starling inventor called Yerai Dal'Terrowin. Since some years he is constructing a special Starling device which is called "Horst" and which he wants to use to gain immortality by transferring his consciousness into it. He asked me to find his assistant Pahtira who he ordered to retrieve a component for the device in the Goldenforst.
After freeing Pahtira
Dal'Terrowin's suspicion that something happened to Pahtira was right: I found her locked up in a cage inmid of a bandit camp. As she is hurt pretty badly from the raid she asked me to get the control unit from the bandit's hideout and return it to Dal'Terrowin in Ark.

This quest will begin after Yerai talks with you when you first enter Yerai's House on the Noble Quarters.

You can get to the camp faster by using the Wellwatch Myriad Tower. When arriving there, a message will appear on-screen:

No Trace of Pahtira... I should look around the area.

Right behind her tent you'll find a blood splatter. Follow the blood trail and you'll arrive at at the Western Cannon-Wall, which is infested with bandits. Enter the Old Myriad Hall and fight your way through the halls to find Pahtira, imprisoned in a cage. Use the quest marker to find the prision key and get Pahtira out of the cage and she'll tell you the bandits took the Steering Unit to their hideout.

Enter fortress Wellwatch and go up the ladder right in front of the entrance. Be careful, as you'll have to fight some bandits and their leader, Kartis. Take the Steering Unit and return to Yerai on Ark. The quest will end and you'll receive 250 Pennies and a a Master Book Handicraft. You can talk with Yerai to begin Apotheosis, Part II.