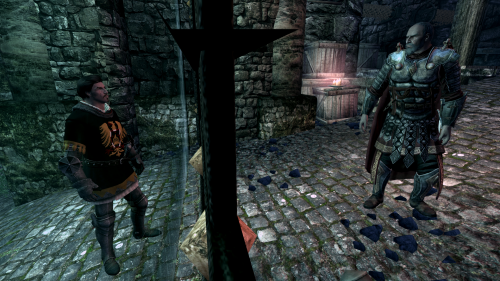 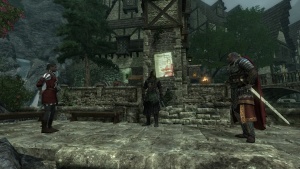 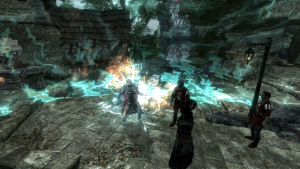 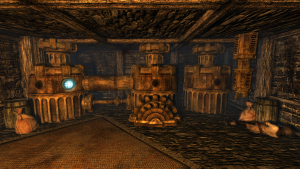 The mecanism that closes Ark's gates.

This quest will begin automatically after the end of Black Light, Part I. After the Archmagister inserts all Black Stones on the Beacon, he will realize that he can no longer cast any magic. He ushers you to find Yuslan Sha'Rim as quickly as possible, because if he is not able to cast magic either, the Nehrimese will be able to walk into Ark through the unprotected gates.

Follow the quest marker to the Nobles Quarter and you'll find Yuslan, explaining to Commander Leora Eren that he can't put up the barricade until the magic blockade is removed. Grandmaster Tealor Arantheal shows up just in time to protect you from a magical air strike, at which point it becomes clear that the Nehrimese have invaded Ark, using an invisibility spell and a magical blockade to disguise their maritime fleet until now. Tealor will give out commands to his men and tell you to follow him to the South District, to stop the invasion.

Follow Arantheal, making your way through Nehrimese infiltrators, and you'll arrive at the South Quarter's Harbor Gate. There, you'll join up with a few guardsmen and charge into the harbor, where you'll have to defeat Commander Silvas and his men near the gate. The gate, however, still can't be closed, because the mechanism is jammed.

Follow Arantheal once again and you'll end up at the gatehouse. He will tell you to open the left gate mechanism, while he opens the right one. On your way to the mechanism you'll experience a vision, from what seems to be a familiar scene: A battle inside a city being invaded. Make your way through the Nehrimese infiltrators until you reach the mechanism, but be careful: There is an cloaked Nehrimese Assassin waiting for you there.

Activate the mechanism and return to the gates. You'll see the guardsmen being ordered to retreat, but just as they reach the gates, a magical barrier is erected, blocking their path. They plead to the Grandmaster, but he rushes to the gate controls and closes the gate on top of the barrier, further sealing their fate. Samael, Taranor's bodyguard, kills them effortlessly.

Taranor will appear and taunt Tealor and Yuslan through the blocked gate, as he announces that every prisoner shall be crucified, and every Endralean, military or civilian, is to be killed on sight. He will have a short discussion with you about his ideas of religiosity as the factor stopping the High Ones from bringing humanity to a higher level, and then he will leave. Tealor will teleport to the Sun Temple and give you a scroll so that you may do the same.

Teleport to the Sun Temple and you'll discover that Signet Leader Jorek Bartarr has betrayed The Order, giving away the location of scouting posts so that the Nehrimese could arrive in Ark undetected. After dealing with the situation, Tealor will ask you to meet him at the Beacon, where Archmagister Lexil Merrâyil will explain that the Beacon cannot be activated without a Numinos, otherwise it will simply result in a big, devastating explosion.

The Grandmaster and the Archmagister will suggest that you rest, this quest will end, and Black Light, Part III will begin.