Difference between revisions of "Enderal:Blood and Dust" 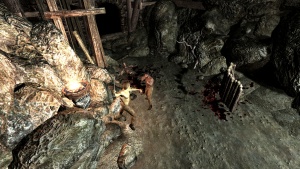 This quest will begin automatically once you enter the Undercity. Follow the objective marker and you'll find the Bash Hole, where two fighters are competing. Talk to Rasha and you'll be able to join the fighting, after signing a few papers and choosing a battle name.

You'll be pitted against three other combatants, Simael Roth, Kana Tannerdaughter, and Tamas Sha'Gar, in a fight to the death. Once all of your enemies are dead, the crowd will cheer and you'll be teleported back to the outside of the pit. The contents of the inventory of your enemies will be in a chest next to Rasha, so there is no need to loot them during the battle.

Rasha, however, seems to have a visitor: A man named Tharaêl, that demands some kind of payment before leaving with a Rhalâta goodbye. After he leaves, you can talk to Rasha and collect your reward, which is 150 pennies. Trying to collect more information about the man from Rasha is a dead end.

Rasha will need some time before preparing the next fight for you. You can go off and do other things in the meantime, or you can choose to wait until she's ready right there. Either way, once the next battle is ready, talk to Rasha for your next fight.

You'll be pitted against The Twins, two twin brothers who will gang up against you in a two versus one fight. Once you defeat them, talk to Rasha to receive your reward. If you have enough Rhetoric, you can notice her absent-mindedness and ask if she is worried about that man from before, Tharaêl. She reveals that he was a representative from the Rhalâta, and that her father is refusing to pay them their protection money, or "Shadow Tribute". If they don't pay up soon, the Rhalâta are bound to send goons to "take care of" the trouble. You can offer to help, but Rasha will refuse all of your attempts.

Again, wait until the next fight is ready, and talk to Rasha. You'll fight Gur Hal'Nan, an Arazelean in heavy armor. Collect your reward, and wait for the next round to be ready. Your next enemy is Raga Shadowclaw, an alchemist that holds a special secret: Once her health is depleted, she will recover completely and turn into a werewolf. Once she's dead, talk to Rasha to collect your reward.

Your next enemy is the "Beast", an undead creature tauted as the "jewel of the pit": if it is killed, a necromancer just needs to sitch it back together and it is ready for a new fight. Once you're ready, talk to Rasha and the fight will begin. The Beast will be unleashed from its cage and taunt you, but before the battle can begin, Tharaêl will appear, kill the Beast, and challenge you for a battle.

Once Tharaêl is defeated, he will teleport you both to the Corpse Pit. He explains that he is part of The Voices, the military branch of the Rhalâta, and that he has a mission for you: to kill their own leader, The Father. Tharaêl will elaborate: He was one of the many orphans that the group took in to experiment on, and once they were done with him and abandoned him on the streets, he saw his cries fall on deaf ears. He decided that the only way to get his revenge was to infiltrate the Rhalâta and kill The Father directly.

You can choose to accept or decline his request. If you decline it, this quest will end and you will no longer be able to continue the Rhalâta quest line. Otherwise, Tharaêl will ask you to meet him in the Wailing Tree, this quest will end, and Qalian's Last Smile will begin.