Difference between revisions of "Enderal:Dreams of the Dead" 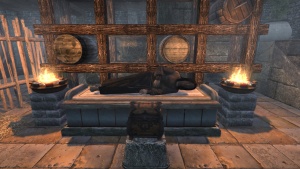 Lishari's body, next to the Word of the Dead

Once you've collected all three Black Stones for Black Light, Part I and return to the Sun Temple, a girl will approach you and deliver a Message from Lexil Merrâyil, which asks you to meet him in the Chronicum as soon as possible. Talk to Lexil, and he'll tell you that Yuslan Sha'Rim proposed using the The Word of the Dead on Lishari's body, in order to learn the identity of the traitor that killed her.

You'll be unable to pick up any items inside of the illusion, and you can only interact by killing enemies or examining the items glowing in gold. As you move on from the Theater to the Old Vault, watch out for the many traps, some of which are instant-death if activated. Eventually, you'll find the traitor's hideout, and will have to search for clues to figure out their identity.

The clues are easy to spot, as they are glowing gold and the only objects you can interact with on the scene. They are:

After finding all clues, pick up the letter at the stand. Lishari will read the letter and seems to figure out the traitor's identity, but she doesn't reveal it. After that, this memory will end, and another one, at the Dancing Nomad, will begin.

Before Lishari can get to her room, she is stopped by Kalim, who seems to be the traitor in question. Lishari is ready to kill him, but stops at the last minute and lets him explain it in her rented room. After a heated argument, she agrees to let him go if he returns to Nehrim and never comes back, which Kalim happily complies with.

Now, go to the room where The Prophet, you, will later show up. Lishari will sit down in the bed, but before she can lament the betrayal of her old colleague, she starts becoming dizzy and passes out. Kalim seems to have drugged the mead she drank during their earlier argument, and was simply waiting for it to take effect. He tells an unidentified person to kill Lishari, and they comply.

After that, you'll be brought back to the real world. Tell the events to Yuslan and the Archmagister, and Yuslan will explain that Kalim was a member of the Nehrimese mages that strongly opposed Firespark's aiding of The Holy Order.

Given that Kalim's whereabouts are unknown, and that the helper that actually killed Lishari is unidentified, there is nothing anyone can do. Yuslan and the Archmagister will lament, and the quest will end.