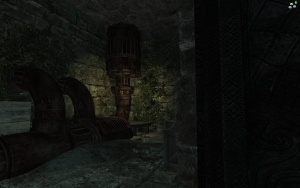 Start: "Object Description of a Researcher" in Old Yogosh.

Explore Old Yogosh until you reach an Iron Door. Open it and to your right you will find a table in the corner with the Object Description of a Researcher. Reading it will start the quest.

We required the last weeks to remove the rubble from the corridor.
The iron equipment was a completely unexpected discovery, which is indicating, that Old Yogosh used to be a water supply facility for the dry areas in East Enderal. If we could reactivate it, it could transform part of the desert into fertile farmland!

There is a switch in the main hall, which seems to loosen a mechanism. But the equipment still doesn't show any function. Gando suggests, that an important part of the line is missing. It could be found in the still unexplored puzzlerooms in the depths of Old Yogosh. We will tackle this search next.

Find the missing part of the mechanism in Old Yogosh

Go back past the iron door and straight ahead until you reach a puzzle in form of 4 gates and 4 levers.
Pulling one of the lever will toggle one or more of the gates. The goal is to open all 4 gates so you can pass them.
Inside the room, you will find the needed "Propulsion Valve".
Note: The quest item only spawns after the quest started.

Insert the propulsion valve into the mechanism in Old Yogosh

Mechanism with the propulsion valve

Go back to the table where you started the quest. Interact with the valve above the table to insert the quest item.

Follow the pipe into a square room with a lever. Interact with it to finish the quest.
Notes: