Enderal:Part of Something Momentous, Part IV 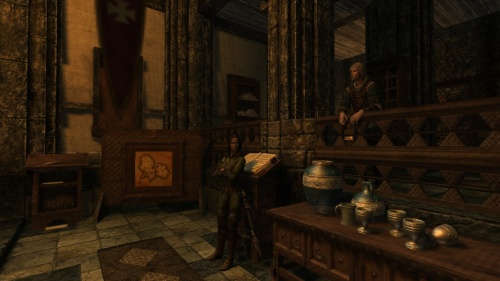 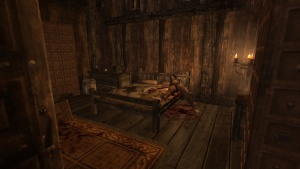 This quest will begin automatically after you wake up on the fishing boat after the The Lion's Den quest. You can ask Enderal:Jespar Dal'Varek about how he's feeling to begin the Every Day Like the Last, Part III quest. Talk to the fisherwoman and she'll suggest you rest a bit more until you arrive back in Enderal. You'll wake up in Duneville, and Jespar will teleport back to the Sun Temple. Two Souls, Part III will begin automatically.

Follow the quest marker to Grandmaster Tealor Arantheal and you'll find him on a meeting. As you get near it, Jespar will introduce both of you back and begin to explain all that happened, including Constantine Firespark's fate. Lishari Peghast and Natara Dal'Veram will have a disagreement, and the meeting will end. As you approach the exit, however, Lishari will speak with you and schedule a meeting on the Dancing Nomad to discuss some new developments on the mercenary attack in Old Dothûlgrad: Apparently, their client as from Enderal, but not just that, from Ark.

Still in the meeting room, you'll be able to witness an argument between the Grandmaster and the Truchessa. Follow the quest marker to the Beacon, now rebuilt in the Sun Temple, and you'll be able to talk with Arantheal. He will explain that the Beacon, once lit, is able to banish the High Ones completely, and forever. To do that, however, the beacon needs energy sources, which the arcanists of The Order are still searching for. Arantheal will tell you to get equipped, as the Nehrimese have already started invading, and the Red Madness grows ever stronger.

At this point, you'll be able to ask Arantheal about his argument with the Truchessa. He will tell you the story of the "Night of a Thousand Fires", where a Qyranian terrorist organization, named the Red Halfmoon, managed to trick Arantheal into slaughtering an entire village, to plant dissent for the Light-Born among the Qyranian populace. Arantheal vowed to never let fear and insecurity make him commit such hasty actions again, which is why he insists on lighting the Beacon, and resists the Truchessa's suggestions, which he sees as desperate actions.

Follow the quest marker to the Dancing Nomad. Open the marked door, and you'll find Lishari, in a pool of blood, with a knife on her belly. Yuslan Sha'Rim will run in just after you, and demand answers. After you talk, he decides that none of you must have done it, and asks that you search for clues. Take the Suspicious Capdust Bottle, right behind the bloodied knocked-down desk near the rug, and Yuslan will rapidly take it and rush to tell the Grandmaster. He suggests that you come back and talk to the Archmagister, as it seems that a power source for the Beacon has been found.

Follow the quest marker to the Archmagister, and he will explain to you that the source of energy the Beacon requires are three Black Stones: A collector's item that seemed to be cursed, giving anyone who wields it symptoms similar to the Red Madness. Lexil, however, needs time to gather all his notes to give you some places to start searching for the stones. After a day has passed, you can return to the Archmagister to gather his notes.

This quest will end, and Black Light, Part I will begin.