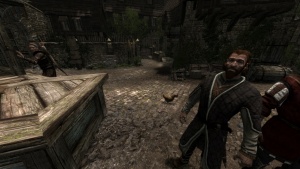 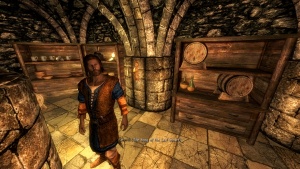 Initial
Master brewer Belend from Ark asked for my help. I am supposed to swap a barrel of "Dal'Sark's Mead" with a barrel of vinegar in the basement of Fat Leoren in the Nobles Quarter so that his beer sells better.
After swapping the barrel
I swapped the mead barrel with the vinegar barrel. However I was caught red-handed by a drunken guest of the tavern and he told me he would report me to the guards. I hope that whatever he drank was strong enough for him to forget our meeting by tomorrow.
Final
I reported the successful exchange to Belend and received my reward - a share certificate for the brewery which I can redeem in the bank.

Cileo will actually report you to the guards and you'll end up with a 40 Penny bounty on your head. However you can bribe the drunkard or just kill him without any repercussion, so it's up to your conscience.