Difference between revisions of "Enderal:Rhalâta Temple" 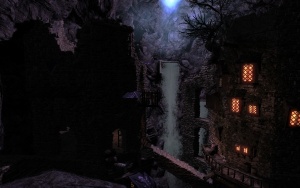 Initially the access to this place is locked. It becomes available during the Rhalâta faction quest In Our Shadows.
The player can enter the place even after finishing the Rhalâta quest line (regardless which side he choose). 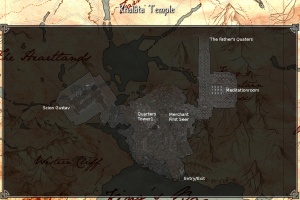 Access to the Father's Quarters is blocked until the last quest of the Rhalâta faction quest Dark Chambers of our Mind by Brother Sorrow.
Once the requirements are met, the stone wall will vanish, revealing the Father's Quarters. The room looks more like a laboratory. Some notable things:

Note: During the final Rhalâta quest, the Father leaves the room and will never come back. Instead, the First Seer will take his place.

The Seer room is the library where the First Seer can be found prior to the completion of the Rhalâta quest line (afterwards the First Seer will relocate to the Father's Quarters).
It connects to the Merchant room.

The "Merchant Room" is where the player can find Sister Envy (the only Rhalâim that trades with the player).
It connects to:

The meditation room (or prayer room) is where the Rhalâim medidate. It's on the hallway between the Merchant room and the Father's Room.

The place where the Rhalâim sleep. There are several sleeping bags on the ground. Connects to Tower 1.

Scion Gustav will stay there after The Price of Freedom has started. Connects to Tower 1.