The Sun Coast is a small region on the south-western end of Enderal. It is the first region the player enters, and where the first few main quests focus in. 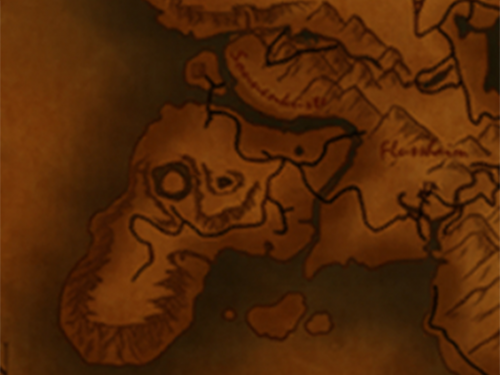 The Sun Coast region, as shown on a map

By all accounts, it is relatively peaceful and sleepy, but only because it remains largely uninhabited. It is for this reason that its few people lead fairly simple Paths, the great hardly ever rising from what little farmland there is.

Recently, a master arcanist, and native of the Sun Coast, went on an insane rampage, killing fifteen of his students before dying himself. Some twenty years before, he had been an exceptional person that aspired beyond his Manufacturer's Path, and became a powerful messiah of sorts. Reasons for his breakdown remain unknown to the general populace.

In the past, it seems as if Castle Goldford had been a powerful place where a noblewoman lived - However, the castle's inhabitants became plagued by a mentally wasting disease (possibly an outbreak of the "Red Madness"), and had to evacuate after supplies had stopped being delivered. It is unclear whether or not the inhabitants completed the evacuation, but it can be inferred that they did not due to the high number of well-equipped Lost Ones populating what remains of the castle.

Although the grass in the Sun Coast is very green and the weather temperate, it is also particularly rocky, making both agriculture and travel a rather linear progression; That is, very slow, and very steady. Crags and boulders dominate the landscape, with meadows being small and dense with undergrowth - In fact, perhaps the only easily-navigable lands of the Sun Coast are the beaches and riverbanks. Rivers form much of the Sun Coast, and several run all throughout it into the large bay from the mountains to the north and east.

The Sun Coast is virtually all wilderness, and yet only the most hardy or most cowardly of beasts live here - Wolves and fowl are among the most common sights here, and even then they're something of an oddity. Bears are rare sights indeed, with even cave-trolls appearing more often, even off the beaten path. In contrast, however, the wet environment shows for a high concentration of both giant crabs and giant spiders, both of which are dangerous predators in their own right.

Livestock and domesticated animals are as tough as the land; Cows are the primary meat commodity, with Leors and dogs being the common beasts of burden.

Though the smallest sub-region in the Sun Coast, it is the most populous, having to its name the town of Riverville, which sits along the river Ville (change name when figure out what it is). The line between Riverville and Yero's House marks the border (see discussion page, topic "Sub-regions for Sun Coast"). 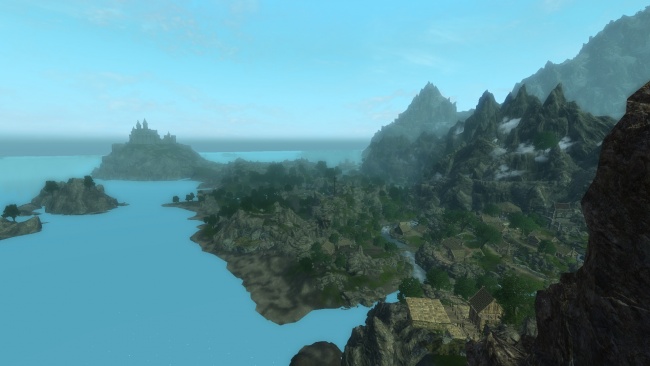 Overview of the Sun Coast, nearest in the image being the Ville-Bay area; Further away to the left is Westford; To the right is Three Rivers

As the largest zone of the Sun Coast, Goldenford is also very geographically distinct, itself being a large peninsula reaching out into the sea. This protrusion is also historically distinct, having both the imposing Castle Goldenford, now abandoned, as well as a high concentration of Pyrean ruins. The line between Yero's House and Old Three River Watch marks the border.

This sub-region is called the most remote place on Enderal by some, and it is made true by the inhospitality of the place; On one hand, mountains and crags crowd into the paths, and on the other, rivers hinder the passage of goods. The Pyreans apparently found a way, judging by the many ruins that dot this area; But all men managed to build was a small little outpost.