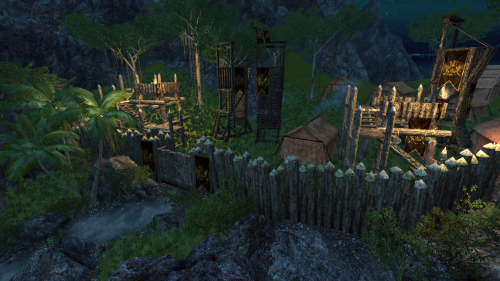 The Nehrimese camp on Halfmoon Isle. 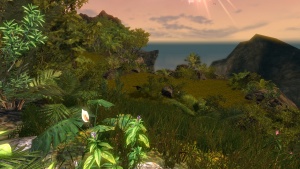 Initial
Regardless of all hurdles and bizarre events: Constantine's plan worked out - we arrived on Halfmoon Isle without anybody noticing. Now we have to hide the Silver Plates in the Nehrimeses' camp.
After meeting the High Ones
Instead of the Nehrimese I met the High Ones in an old ruin on the island - once more not in their real form but instead as possessed animals.
After completing the quest
To call the mission on Halfmoon Isle a "failure" would be an understatement - After I meet the High Ones the troops of Taranor Coarek caught me. When he found my Silver Plate, he used it to contact Tealor Arantheal. Coarek wants us to stop the reconstruction of the Beacon as he sees the High Ones not as enemies, but instead as "messenger of a new era". Tealor refused - now we are at war. 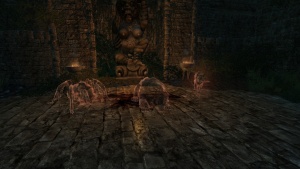 The High Ones, talking through animals. 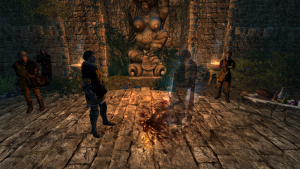 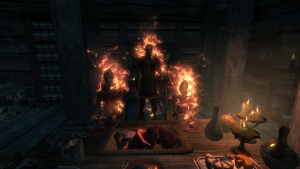 This quest will begin automatically after the end of Into the Deep, when Jespar wakes you up inside the Undertrain. Leave the train and you'll find yourself in a station very similar to the one you just left, plagued by various weak skeletal Lost Ones. Make your way through the calcium-filled foes and follow Jespar into the tropical Halfmoon Isle. As you near the Nehrimese camp, Jespar will stop you and give you your Silver Plate, suggesting that you split up to reduce the damage if any of you is caught.

Keep going forward and you'll find a small campfire, where a Nehrimese Battlemage and a Nehrimese Officer are talking. Note that there are no consequences to being detected, so you may treat any Nehrimese you find as a normal enemy. To the east of this small campfire you'll find a massive chest, an Adept book in Heavy Armor, and an Ice Claw, in a ruin. Keep following the path, and you'll end up in a bifurcation: The tighly locked-down Nehrimese camp to the Northeast and a ruin to the Northwest.

Going near the camp just leads to what you already knew: There's no way to come in through the front gate, you'll have to find another way through. Follow the path to the ruin on the Northwest. Just as you step near the sleeping bear at the center of the ruin, it will wake up and talk to you. There you will receive a message from the High Ones, who are now using the bodies of animals: A giant spider, a bear, and a wolf. They will give you the chance to ask a few questions, that they swear will be answered honestly. You can ask:

After you're done talking to the High Ones, Taranor Coarek's team will attack you. You'll wake up blindfolded, where Taranor will explain that you are surrounded by the Nehrimese, so there's no point in trying to escape. Jespar has also been captured, so there's no point in trying to lie either. Taranor will ask you a series of questions, until Alma, Taranor's commander, finds the Silver Plate in your belongings.

Taranor uses the plate to contact Grandmaster Tealor Arantheal and give him an ultimatium: Stop rebuilding the Beacon and tell the people of Enderal the truth about the Light-Born, or Nehrim will officially declare war on Enderal and The Holy Order. Tealor refuses, and ends the Silver Plate conference. Taranor will tell his bodyguard, Samael, to put you and Jespar on a raft, and leave your fate to chance.

This quest will be marked as completed, but there are still a a few sections after it that: You'll wake up in the same location you woke up at the beginning of your journey, but this time Daddy will be visibly burnt and battered, almost as a dead body. Inside the house, you'll find your mother and sister, in the same state as Daddy, but also blindfolded. You'll automatically sit on the table with your family. Daddy will inquire as to why you, a weak little brat, should be the solution to the problem that plagued thousands and thousands of civilizations.

The family will then catch on fire, as Daddy explains that you are not yourself, you should be with them, in the realm of the dead. He pleads and begs you to come back to them, to let yourself fall, let yourself go. Over the pleading and the fire, you hear Jespar, and you'll wake up on a fishing boat. Jespar explains that you were put under a very strong sleeping spell, while Jespar only received a blow to the head. The raft you were both put on was very brittle, but a fisherwoman found you and put you on her boat.

Now, the quest will really end, and Part of Something Momentous, Part IV will begin.