Difference between revisions of "Enderal:The Price of Freedom" 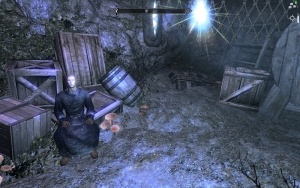 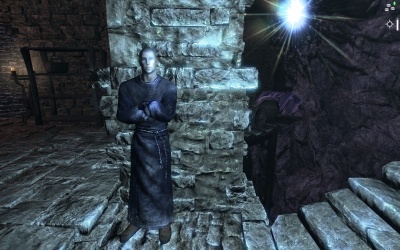 Scion Gustav trying to speak with the Prophet

After finishing the Rhalâta quest Qalian's Last Smile, the quest In Our Shadows starts. During this quest, the player unlocks access to the Rhalâta Temple (you can't enter the temple earlier). After talking with the First Seer, you are free to move around. Move back to the first tower (take the stairs near Sister Envy) and you will find Scion Gustav standing near the stair case to the exit. He tries to get your attention by talking to you. Interact with him to start the quest.

After interacting with him, he will tell the player to follow him to a more suitable place.

Follow Scion Gustav into the nearby cave and wait until he sits on a box. When getting close to him he will initiate another conversation.

During this conversation, Scion Gustav asks the player for any old artifacts that he finds and promises to pay more than the merchants. When passing a Rhetoric check, he reveals that his goal is to impress the Father by brining him the old artifacts. Further talking will also reveal that he is from sublime origin but abandoned his old life due to his disbelief in the Path. He also admits that he hid some of his coins from the Rhalâta when joining them (and that he is using this money to pay you).

Gustav will remain in the cave and the player may visit him anytime to offer new artifacts. The player will receive the money after closing the offering window. Gustav will pay 133% of the proclaimed market value.
Example: Offering 100 Ancient Crystal Coins (worth 10 coins each -> 1000 coins total) will yield 1330 Endralean Penny Coin(s).
Note:

Verify me: There is apparently no intended way to end the quest.
If you still want to "finish" it, you have to resort to console commands: