Difference between revisions of "Enderal:Wanted in Ark!" 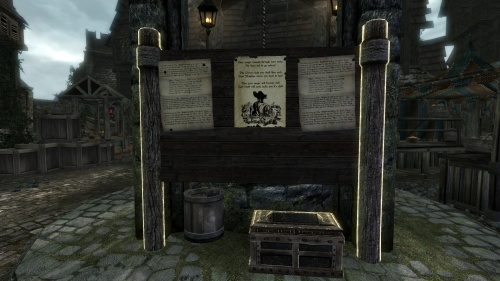 Enter the Rock Shelter west of Ark. There are a few runaway prisoners. One wild mage at a table. Up a set of steps are two wild mages. Through a locked lattice door, Bertulus is behind an Expert locked door, so a high lockpick skill is needed to loot that area once he is slain. He can be killed through the door and the bounty turned in however. If your lockpick skill isn't high enough, you can just fight your way through the cave, kill the mages and prisoners along the way, and then kill Bertulus. In the final room is also a mage, which will need to be killed for you to be able to loot everything in the room.

The dungeon has a back exit you can access via a ladder.

There's a shortcut for this quest: Leave the Markerplace trough Noble Quarters gate, go to in the place described on picture and enter Old Waterworks back door. There you will encounter three Highwayman, Wild-Mage and "The Strangler" himself. Pawdance is equipped with a Fine Leather set of Cuirass, Boots and Arm protectors and also wears two Steel Axes. If you were in the room before and killed the Highwaymen and Wild Mage, only Pawdance and another Highwayman will spawn after you accept the quest and enter the Old Waterworks.

Use Teleport/Myrad to Farmers Coast,run down the mountaint and enter the Abandoned Lighthouse go upstairs and you will encount Ora Millendance herself.

Follow the road on the right side next to the Frostcliff Tavern. On the left side of the Road you can find the Wild Mage Camp. You will encounter Gagantua, two wild mages and several summoned creatures. 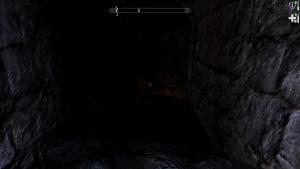 At the north coast of the Goldenforst is the Hermit Cave where you can find Poldir. He is accompanied by a Fire Elemental and two Wild Mages. There is a well behind the small room with his bed and in it is a Magical Symbol.