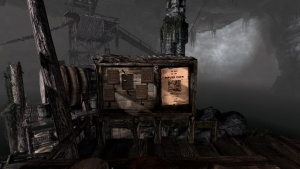 Leave Duneville through the top exit and walk south east, passing Duneville's Myrad Tower to reach the graveyard. The entry to the crypt is a door on the east wall.
Once entered, follow the stairs to your left to reach a bigger room with an Ancient Spirit, 5 Conjured Guards and an Awoken Lost One.
At the end of the room you will find a crossroad. To your left is the boss, to your right is a Lord of the Lost Ones.
Loot info:

The boss is standing on the beach between Duneville's Supply Ship and Aurora's tower (from the Quest Cuthbert's Legacy). There are no other enemies around (except wildlife).
Loot: Bloodstained Warhammer (Damage: 49, Weight 31, Value 363, Effects: None)

Fighting against a Myrad is like fighting a dragon in Skyrim.
He is constantly flying around, trying to ram you while flying through the ground and walls. His ranged attack is a big ball of Entropy.
He will also occasionally float in the air in order to shoot at you or land on the ground for melee attacks.
At ~33% HP he will stagger, aborting his current action and fly to a suitable location for a "crash landing". From that point on, he will remain on the ground.
Killing it awards 1500 EP.
Loot: Spell Tome: Cannonade (Mythical), Mighty Myrad Bone, Human Flesh (4), Endralean Penny Coin(s) (43), Bloody Skull, Bloody Ribs, Bloody Leg Bone (2), Bloody Arm Bone (2)