Difference between revisions of "Myar:Andamantar" 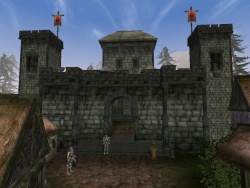 Andamantar is located on Nursill. The city is the seat of the Count of Andamantar. From there it rules over much of the island. It is the most important settlement on Nursill after Ertorath.

Andamantar lives on the taxes of villages that also belong to the count. In Andamantar itself, therefore, little trade is done. There is only Werener the blacksmith who deals in weapons, armor, and tools, Moridan, a magician who gladly passes on his knowledge in the magic schools of Destruction, Alteration, and Illusion to others, or even sells them completely new spells and Kolver, an outfitter. In addition, warehouse manager Esanor is a grateful buyer for all kinds of goods, but he does not sell anything.

The city is surrounded by a small wall, but the only truly fortified building is the Count's castle. There are guards stationed in the city and in the castle. Most are paid by the count himself, there are only a few guards of the empire in Andamantar.