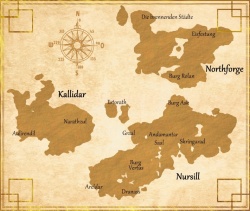 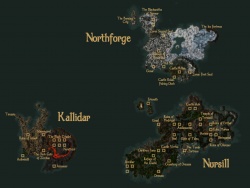 Myar Aranath plays in the world Vyn, where the three other published Total Conversions of SureAI, Arktwend - The Forgotten Realm, Nehrim - On the Edge of Fate and Enderal - The Shards of Order also take place. Myar is west of Melee.

In total, you can enter ten cities and castles next to Fort Teras where the game begins. Castle Rolan is located on Northforge, and Aulirendil on Kallidar. Nursill, on the other hand, has Graal, Castle Ask, Hall, Areldar, the Castle Vertus, Dranass, Andamantar and Ertorath.