Description of the Encounter

Kabar's first interaction with the player is during the second objective in the side quest "Put Off the Evil Hour", after a conversation with Nathalia Poppyflower. After eavesdropping on the conversation between Nathalia and Kabar, the player can approach Nathalia and ask her about any problems. She calls Kabar "son of Vatyr", and explains that he is making his living on the misfortune of fleshmaggot victims in Undercity. He is the only merchant in this part of the city that sells Red Vynroot, an essential part of treatment conducted by Apothecarii. Nathalia also says that Kabar's Vynroot is much more expensive, compared to merchant prices from the "surface" (upper parts of Ark). After addressing those issues to Kabar, he denies everything and tells the player that he's actually selling Vynroot for lower prices than other merchants do. The player has to make a choice: either believe Kabar and buy herbs for the actual price of 300 gold, or search his sleeping area, in the Communal Barracks (door to the left of his counter). If the player chooses to trade, Kabar will be quite pleased ("Pleasure doing business with you") although further interaction between Kabar and the player won't be possible at this point. If the player chooses to search Kabar's sleeping area, they will find an unsigned letter, which reads: "Kabar, as soon as possible at the corpse pit. No weapons, no stupid ideas". Upon following the clue and entering the Corpse Pit, the player will witness a conversation between Kabar and two masked individuals. When later confronted about the dialogue, Kabar will tell the player about the real reason behind his high prices. He took a loan from a secret cult, called The Rhalâta. The player can do one of three things now: Give him 100 gold as a gift, in order for him to sell Vynroot for less. Give him 300 gold, so he can repay his debt with The Rhalâta, or simply threaten him and take all his Vynroot by force(*). No matter the choice, no further interaction between Kabar and the player is possible at this point.

(*) This 3rd option of threaten him and take the Vynroot is replaced by a different option "Go to the Sun Temple and tell them the Prophet sent you. The Apothecarii there will buy the roots from you at full rate". I am guessing this option is available only when you have already talked to Grandmaster Tealor Arantheal and accepted to become part of the Order. 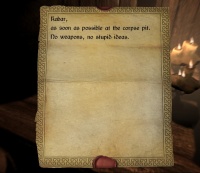 Despite being portrayed as a greedy and merciless merchant by Nathalia, Kabar is, in reality, far from that. During his dialogue in the Corpse Pit he reveals the cause of his current bad state. His son had drowned in the canals two years ago, which he couldn't handle. Thus his business went downwards. This forced him to take a loan from The Rhalâta, and sell Red Vynroot for increaced prices to the Apothecarii in order to survive and keep the shop open. After he is given any amount of money, he will eagerly lower his prices, which is supports the claim that he is not merciless.