Enderal:A Foot in the Door 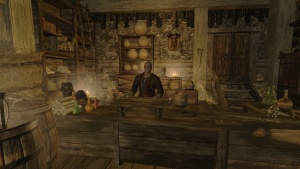 Doria's necklace is on the platform to the right

This quest can be started by talking with Mendelus Pennypouches on the Golden Sickle's Trading Post in Ark's Marketplace. He will tell you that you should help other Golden Sickle workers to win their good favor before you can join them. There are a total of five workers you can interact with, but only three of them will accept your help: Rogash, Gunam, and Doria.

Rogash will tell you that a beggar has been harassing the workers with his foul smell and constant begging in front of the trading post. He says that the guards only give him a weak scolding, and asks for your help getting rid of him, even if it means beating him up.

In reality, there is no beggar. Saying that you'll cooperate and agreeing to beat up the beggar will only earn Rogash's anger, as he tells you that you should join the Rhalâta instead if you want to crush people. Refuse to beat up the imaginary beggar and you'll earn Rogash's recommendation.

Gunam will ask you to deliver some papers to Elijas Goodwill. Accept the request and deliver the papers to earn his recommendation. Deny, and you'll only earn his anger. Elijas can be found in the Grain Farm.

Doria will ask you to recover her necklace, which she lost in the trading post. Deny the quest and you'll earn her anger. Enter the side room of the trading post and go up to the second floor platform, where the beds are. Jump over to the other second-floor platform (that has no stairs leading up to it) and you'll find Doria's necklace on top of a barrel. Deliver the necklace to her and you'll earn her recommendation.

Return to Mendelus with at least one recommendation and you'll be accepted into the Golden Sickle. This quest will end and The Long Way to the Top will begin.