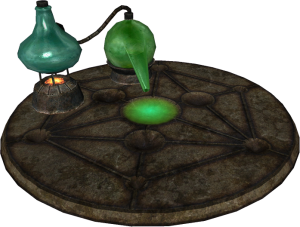 Alchemy in Enderal works exactly like in Skyrim - ingredients have four different effects which are initially hidden, though the first effect can be discovered by simple eating. These are combined at an alchemy station, which is mandatory for any potion or poison creation. Just like in the original Skyrim, alchemy is quite a moneymaker.

In order to brew potions, you need:

Interacting with any alchemy lab will open the alchemy interface. There you can select between 2 and 3 different ingredients and try to create a potion with them. A potion will be created if at least two of the used ingredients share the same effect. The strength of the potion is determined through your level in alchemy. The memories of the Vagrant and Lycantrophe can further modify the result. If the ingredients do NOT share the same effect then the brewing will fail (the ingredients will still be consumed). While selecting ingredients to brew potions, already tried (and failed) ingredients/combinations will be grayed out (they can still be selected again).
The interface also allows you to filter ingredients based on their effects. In the left side of the interface you can select the effect you want. If you only have one ingredient with the effect then the text will be greyed out. If you have no ingredient with the effect then the effect won't be listed at all. The filter only works with unlocked effects. To reset the filter, simply click on "Ingredients".
Notes:

Each ingredient has 4 different effects. However, they are initially hidden. In order to reveal them, the following methods can be used:

The simplest method. Open your inventory and click on the ingredient to eat it. This will apply its effect on you and also reveal it. However, only the first effect (top left) will be revealed by this method unless the memory "Sensitive Tongue" from the Memories of Vagrant is unlocked.
Note: This method is potentially lethal as you will also be afflicted by negative (poisonous) effects. Especially "Wolf Blood" or "Chymica" effects can deliver a quick death if you do not have the appropriate memories of the Lycantrophe.

Reading recipes will not only tell you which ingredients can be used for the corresponding potion but will also unlock the effect on the ingredients.
Example: If you read a recipe for ambrosia then the "ambrosia" effect on the mentioned ingredients will be unlocked.