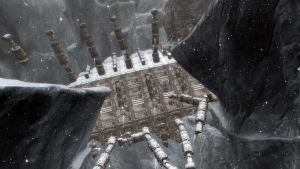 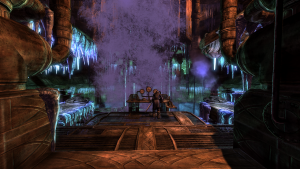 Pahtira waiting for The Prophet on the generator room. 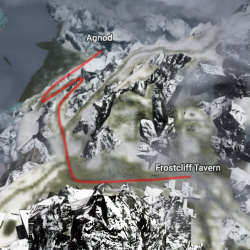 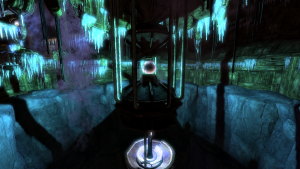 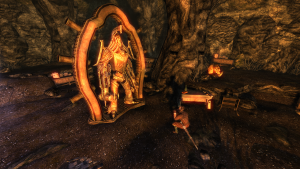 You can begin this quest immediatly after Apotheosis, Part I by talking with Yerai.

To get to Agnod, go to the Myriad Tower near the Frostcliff Tavern and follow the path North, always going down whenever possible. You'll arrive on a ravine, and at its end, there's Agnod. You'll need to parkour your way up using the "arms" hanging from the side of the ship to reach the door.

Inside the ship you'll have to fight various high-level Starling enemies, so be prepared. Following the quest marker will lead you to a Master locked door. If you have 100 Lockpicking, the Master Thief memory, or a Scroll of Ondusi's Key (Master), you can pick that door and skip directly to the Generator room. Otherwise, you'll have to take the long way through, starting at the Quarters to the south.

In the Generator room you'll fight The Mechanist, a stronger version of the Starling Centurion. Use the elevators there to go down and find Pahtira (You may have issues with the elevator, see the Bugs section). Open all four valves located in hanging platforms near the generator and walk down to take the core. As you are ready to take the core, however, Pahtira reactivates the energy surplus and you're shocked. She tells you of her plans of treason, and the room begins flooding as soon as you wake up.

The lower elevator is destroyed in the explosion, so you'll have to wait until the water rises to reach the upper elevator. Leave the ship and head to Ark. Before heading into Yerai's home, be sure to prepare for a tough fight. When you're ready, head into Yerai's home and you'll notice that Horst has disappeared, and so have Yerai and Pahtira. Head into Yerai's Workshop.

You'll have to fight Horst, or rather, Pahtira united with Horst. The easiest way to defeat them is to strike them from a distance since Horst, like all Starling Centurions, is fairly slow. Once all is done, talk with Yerai and the quest will complete.