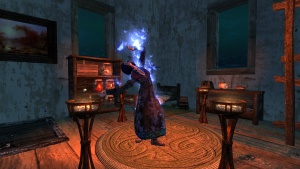 The path to Maxus

You can begin this quest by finding one of the "Adventurer wanted!" notes around Duneville, or by talking to Maxus Tabaccus directly. The notes scattered around Duneville read:

For a mission of the extraordinary kind. If you are interested, search for Maxus Tabaccus, studied alchemist of the Si'Shin-Academy of the Arcane Arts.

You'll find Maxus in his "laboratory" atop a tower. To get there, however, you'll have to traverse a tightrope-like structure, starting at a nearby tower. A note from Maxus on top of a barrel gives the best advice on how to traverse the rope: Keep running, and don't stop. The rope itself is not solid, and you'll fall through it if you attempt to stand on it. Only the wooden planks can hold you up, but they are very thin and you'll likely fall between the gaps of the planks if you attempt to go slowly. So, unequip your armor, sheathe your weapon, and sprint across the "bridge" to ensure passage.

Talk to Maxus and he'll explain that he is a certified arcanist from the Si'Shin Academy in Qyra, and that he wants you to find his diploma. Accept the job, and he'll tell you more details on the local tavern. He explains that his pet pig, Cuthbert, died some time ago and likely buried Maxus' diploma somewhere in the Powder Desert. Maxus wants you to find a woman, Aurora Leklerk, who can commune with Cuthbert's spirit to find the buried diploma. He gives you 100 pennies to pay for Aurora's fee, and some bristles from Cuthbert to help "channel" his spirit, then sends you on your way.

You'll find Aurora on the shore of the Powder Desert, at the top of an unmarked tower. The lower floors of the tower contain a Boneripper, which you'll have to deal with before going up. Talk to Aurora and ask for her services. She laughs at the bristles you bring her, and instead gives you a Recipe for a Potion of Cosmic Winds, which is what she actually needs for the ritual. She also asks you to repair her door, which the Boneripper in her lower floor destroyed, and gives you a recipe for it.

To brew a potion of cosmic winds, you'll a King Mead, 2x Peaceweed, and a Banana Liquor, all of which can be bought or found throughout the world. Once you have the ingredients, head over to an alchemy table and a message will ask if you want to brew the potion for Aurora. Accept it, and you'll brew the potion. For the door, you'll need 10 Spare Parts, 7 Wood, 2 Iron Ingots, and at least 25 Handicraft. Once you have the ingredients and the skill, head over to any anvil and craft the door, which appears as a regular recipe.

Once you have fixed the door and brewed the potion, talk to Aurora, give her the potion, then sit at the chair on the middle floor of her house. She will begin her "séance", where the "Voices of the New Age" will summon a blond woman with a "wealthy bosom" that says she loves you and is waiting for you peacefully. Once the debauchery is over, call out Aurora and she will reveal the truth: A real séance causes much Arcane Fever, and most of the time the deceased say the exact same thing, and so she just... "improvises". Aurora is initially reluctant to actually summon the mini-pig from the dead, but she quickly changes her mind once you mention that you're working for Maxus Tabaccus, and summons the pig for you.

Talk to the mini-pig, and it becomes apparent that it is hungry. Pick up the Endralean Crusty Braid on top of the table at the west wall and feed it to Cuthbert. Satisfied, the ethereal pig disappears and leaves you with a new Psionics spell: "Cuthbert's Visions". As long as you keep casting the spell, a series of red magical swirls will appear, forming a breadcrumb trail to the location of the diploma. If you ever get lost, return to Aurora's house and cast the spell there, as the first magical swirl appears at her door.

You'll end up at the Soul Bed, where Cuthbert re-joins you to search for the diploma. Follow the objective marker, and you'll find a giant Grotesque Lost One in a small cave. Don't worry, though: Cuthbert's got your back. The pig runs around the giant until it smashes the cave so much that a cave-in kills the giant. After the pig victory, Cuthbert will stand next to a dirt mould, which you should dig up (you can take the shovel right next to the mould if you don't have). You'll dig up a lingerie and some study notes, but no diploma. Talk to Cuthbert, and it'll point out the grotesque lost one. Loot the giant, and you'll find Maxus' diploma, covered in blood.

Return to Duneville and deliver the ruined diploma to Maxus. He laments the loss of the diploma, and then reveals his true motives to you: He is enamored with Aurora Leklerk, and just wanted the diploma to impress her. If you ignore his motives and simply ask for your pay, Maxus gives you your 450 pennies, and the quest ends right away. Otherwise, you can try to convince him that Aurora likes him too, which he will dismiss. He will give you your 450 pennies, but the quest won't end here: Sensing that the two won't do anything on their own, you're now tasked with preparing a dinner for them and luring them into it.

First, lure both of them to the beach next to Aurora's house at sunset. To lure Aurora, tell her that her sister Tarhutie will be visiting her. To lure Maxus, tell him that a ship from Qyra will be docked there, and that you'll pay for his new diploma. Then, acquire the ingredients needed for the dinner: One Potato Cabbage Soup, two Roasted Poultry Meat, and two Mead of Dal'Sark. Once everything is ready, go to the small beach next to Aurora's house and prepare the dinner.

You'll automatically hide in the bushes, watching as Aurora and Maxus meet. Aurora arrives first, searching for her sister. When Maxus arrives, he gets on his knees and proclaims his love for her, and she reciprocates. They start eating the dinner, which Maxus claims to have cooked himself, and you'll be teleported to the Duneville tavern. Travel back to Aurora's house and you'll find Maxus fixing the wall of the lower floor with his new mini-pig pets. Talk to him and he'll thank you and give you a spell book for Summon Cuthbert, ending the quest.