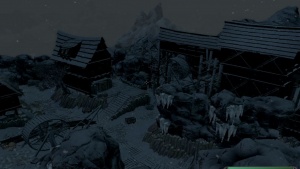 Deep Diggers' Settlement is an abandoned mining camp deep in the Frostcliff Mountains. It can be accessed through the west, by passing through Dark Leap Watch.

Deep Diggers' Settlement is on the side of one of the mountains in the Frostcliff Mountains. It is in an inhospitable area that is constantly snowing and surrounded by deadly monsters. The the actual settlement consists of multiple buildings surrounding a common area. On the hill to the north is a larger building that seems to have served as the main base of operations for the town. The outdoors is currently overrun by Grotesque Lost Ones (undead giants) and Awoken Lost Ones. Up top, on the upper mine track, is a mine card with a Magic Symbol in it.

The main building on the northern mountainside is called Deep Diggers' Hollow Shed. Entering this building, the player will immediately be faced with an army of lost ones. On the top of the stairs, to the left of the entrance, there is a chest (Locked-Apprentice). Going further into the building will lead to more lost ones there is a chest across a log here and a bed to sleep in. When the player reaches the bottom hallway, they will face the Lord of the Lost Ones. Beside the ramp near the Lord of the Lost Ones, is a (Set of the Wandering Mage) Echo of the Wandering Mage. Following the path will lead to the lower entrance near the center of the Deep Diggers' Settlement.

This is a small shack near the North-Most shed. Behind this building is a chest. This shed has a single Vatyr in it, alongside a chest. On a box to the right is the spellbook Kilana's Secrets: Glacial Bomb (Tier III).

This is a large mine near the southwest side of town. The player will enter here and find multiple lost ones to fight. Going straight, the player will reach a gate. Behind it are multiple more Lost Ones and a Lord of the Lost Ones. There is a Chest (Locked-Apprentice) in this room. Your time in this mine is not over yet. Dive into the pool of water to find a Magic Symbol and another section of the cave behind it. Over here are a bunch of Frost Trolls. There is a Massive Chest (Locked-Adept) in this room. The left side of this room leads to a rock wall with a lever near it. Pull the lever to open a secret passage back to the entrance.

This storehouse one of the buildings on the settlement's southern edge. The player gets enters through a trap door on the ground. There is a chest right next to the entrance. Entering this "storehouse," the player realizes that it is more of a crypt. There are Frost Elementals, Oorbaya, and Soil Elementals patrolling the area. In one of the crypts is a (Set of the Ash Warrior) Shell of the Ash Warrior alongside a Kilean Sarass (A strong, enchanted, curved sword). There is a chest behind a gate. The lever to open this gate is on the middle pillar of the archway to this side of the room. I just now realized that the player is supposed to enter through the front door of this house (who would have thought). Up here, in the main portion of the house, are multiple elementals. There is a massive chest up on the second floor and another chest on an alcove that needs some platforming to reach.

This is one of my favorite rooms in the entire game. You enter and realize that it is filled with extremely difficult Frost Trolls. Kill the frost trolls and loot some chests. There is one down by the river, another forward towards a dead end, and a final one across the bridge to the right. Follow the path to the top. This is when you realize the SureAI wanted skyrim to actually be a platformer. You need to jump across the gap with the boards sticking out. Then jump across another gap to reach a frozen over cave. There are 2 more frost trolls in this cave. Kill the frost trolls and look around to find a dead body hanging from the ceiling. Who else would it be, but Luke Skywalker? Examine him to net yourself the "Come On, You Stupid Rod" Steam achievement. Do some more platforming to net some loot and exit where you came in.

This building cannot be entered.