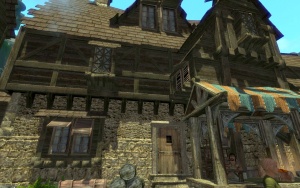 Golden Sickle, Guildhouse is a three-storey building with a basement below, which serves as the Golden Sickle's headquarters and seeping quarters. The guildhouse is locked with an apprentice lock. Insde the house, a number of Scribes can be seen meticulously performing their duties.

It is a three-storey building with a basement below. The office is situated in the attic; the sleeping quarters and Scribes are on the upper level of the building.