Lockpicking in Enderal works like in Skyrim - locked containers and doors can be opened by completing a minigame with a Lockpick. 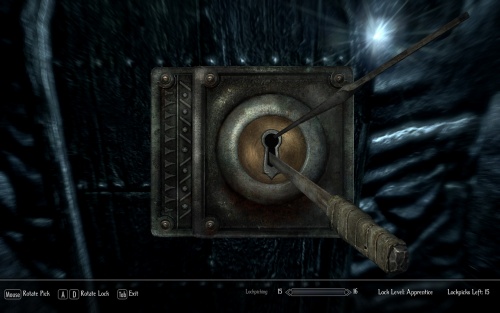 In order to pick a lock, you need:

Note: Contrary to the ingame messages, investing memory points is NOT required for adept+ locks. It is just an alternative to a high level in Lockpicking. Source

An alternative way to open locked containers (that neither requires memory points nor crafting points) is the usage of a Scroll of Ondusi's Key.
The scroll comes in 4 versions: Apprentice, Adept, Expert and Master. Casting the scroll on a locked container/door with the matching lock level will completely remove the lock.
Removing a lock with a scroll does not award the player with xp. While the scroll is the fastest way to open a lock, it is also expensive as each scroll is a single use item.

Forgotten Stories: Lockpicking also increases the amount of coins/money that you can find in containers.