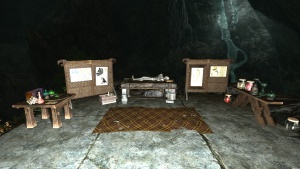 Yero's tower, on the inside

This quest will begin automatically once you pick up the key in Yero's strongbox during the main quest.

You'll find your objective in Yero's Tower, which is at the end of a big field to the south of the entrance to the Sun Temple. The door to the tower is locked with an Adept lock, and the key you acquired doesn't work on the door itself.

Inside of Yero's Tower, you'll find a trapdoor to a secret vault, which can only be unlocked with the key you acquired. The secret vault is a big cave guarded by numerous high-level Conjured Guardians and a Powerful Mud Elemental (which carries Yero's Last Words), so be careful.

At the top of the vault, you'll find Yero's laboratory. The objective marker here will point to a recipe for Dreamflower Elixir. Once you pick it up, the quest will end.