Tarhutie Leklerk is an eccentric alchemist merchant in Riverville. She offers the Bad Vibrations quest.

While there seems to be no surviving members of the Leklerk family, it possible to find a note written by a "B. Leklerk" during the Secrets from the Can quest. "B" hides his inheritance money to keep it away from his "scheming daughter". Given Tarhutie's less-than-normal personality, it may be safe to assume that "B" is Tarhutie's father.

Tarhutie has a very special way of being, always connected to the "spiritual world". She judges others' "auras" to sense their emotions or near futures, and also claims to have concocted a "beauty potion" to stop the effects of aging, although given her appearance, it's safe to say that it doesn't work. 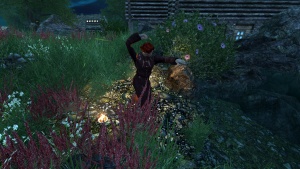 Tarhutie "Sleep Meditating" near the pond.

At 8 AM every day, Tarhutie will go to her stand in the Riverville market to start working. At 8 PM, she'll stop her work routine and begin eating for an hour, and then she will relax for another hour. After that, Tarhutie will go the pond next to Riverville's church and begin her "Sleep Medidation", in which she dances around the pond from 10 PM to 4 AM. Trying to talk to her during her "Sleep Medidation" will just lead to her telling you to stop, because you'll "disrupt the flow of [her] energy". After 4 AM, she'll "wake up" but continue dancing, in her daily Yoga session. During the Yoga session, she can be interact with normally. This will continue until 8 AM, when she'll go to work again.