Enderal:The Voice from the Water 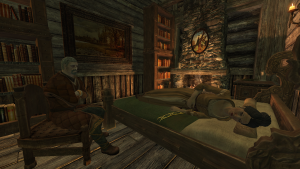 Jugar and his wife. 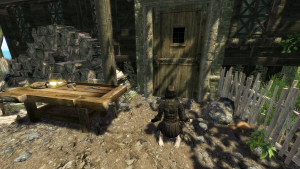 The woman kneeling in front of Pentas' House. 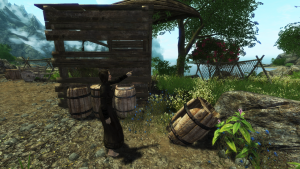 The woman point towards Glimmerdust Cave. 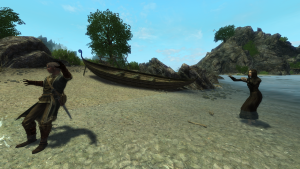 To begin this quest, go to Mayor's House in Riverville and ask the Mayor about his sick wife. When he asks you how he should trust a stranger, tell him you know a thing or two about magic, and he'll bring you upstairs to see his wife. After sitting down and talking, you be able to see one of those "fits". You'll have a vision telling you of a fisherman named "Pentas", which will prompt you to search his house.

As you arrive on Pentas' House, you'll notice a woman in black kneeling by the door. As you approach her, she'll walk over to some boxes and disappear. Go to where she was to find the key to Pentas' House. Inside the house you'll learn the full story after having some visions. Leave the house and that same woman who gave you the key will walk and point towards a direction.

Follow the quest marker and you should arrive at Glimmerdust Cave. Take the orders from there and the Mercenary will appear and attack you. Follow the quest marker to find Meldor near the shoreline. Any action you take here will lead to the same outcome, but if you blackmail him you can get 70 Pennies and, if you have enough Rhetoric, an Amulet. After you're done talking, the woman will appear from the sea and explode Meldor into a mess of blood and bones.

Jugar will tell you that his wife's illness mysteriously resolved. You can choose to lie to him about the events or tell him the truth about the betrayal. He will then give you the key to a strongbox downstairs which contains several quest rewards including a skillbook, a ring, pennies, and other items.