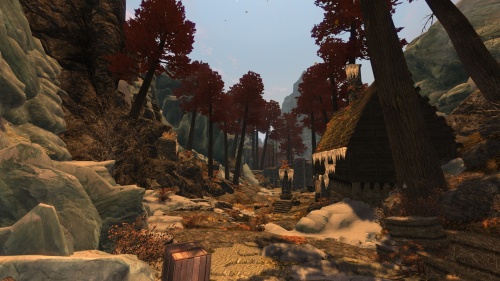 Initial
The nehrimese house of the boddenbruuks searches for: Max Niceblood. After faking his own death in Nehrim he absconded to Enderal and was seen at a farm near Ark's harbor. Arrestsing him holds the propect of a reward of 10.000 Nehrimese gold coins
After finding the note
I found a note which is hinting to Ark's Last Watch as his hiding place.
Final
Max Niceblood absconded to Qyra. He left a message and a reward for me and asked me to end the search for him.

Max Niceblood's hideout is on an abandoned farmstead to the southwest of Ark, directly across the bridge from Ark, Harbor.

Once the player arrives at the farmstead, they are greeted by a few wolves and highwaymen.

The note is on a table inside the farm's barn. The note describes how the owners of the farm sheltered Max Niceblood for the winter in the barn and how he has moved to Ark's Last Watch as a permanent residence. Laying on the table with the note are a spell book for the spell Chain Lightning, a coin purse, and a steel mace.

The Road to the Last Watch

Ark's Last Watch is a site in Goldenforst, but the easiest way to Ark's Last Watch seems through Farmer's Coast. Use one of the Myrad Tower and fast travel to a Myrad located in Farmers Coast. From that point head towards the quest marker, which means following the main road, going past Honeybrewery at the Upper Farm until you see an imposing statue and a stony staircase, which will ultimately lead to Ark's Last Watch.

The Exterior of Ark's Last Watch is a campsite which multiple marauders, highwaymen, and vagrants are occupying. These enemies range from level 10-20. Defeat them and then enter Ark's Last Watch's interior. However, before you go, check behind some piles of hay on the west entrance for a learning book which grants 1 memory point. There is also a magic symbol on the roof directly above this book. If you are in for a small excursion and a challenge, then enter the guardhouse. Inside awaits a lvl 26 wild frost mage named Bethula and a lvl 20 marauder, along with 3 chests and a Fireball 3 spellbook.

Inside the Watchtower is a small room with no enemies. On a table lies a note from Max Niceblood where he explains that he caught wind of us chasing him and that he has moved on to a place we will never find him. Max ends up living up to his family name by leaving behind a bunch of money for the player, saying that its for our effort and to please stop the search for him.