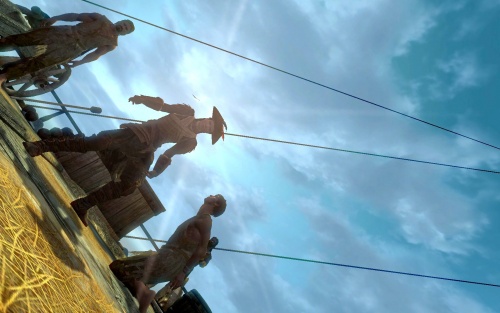 Rocio about to kill Sirius 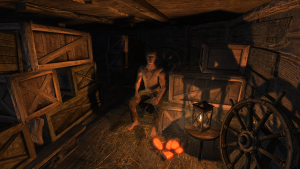 Sirius, as he wakes up the player 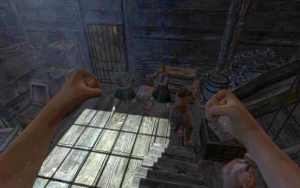 Fighting off the Sailors 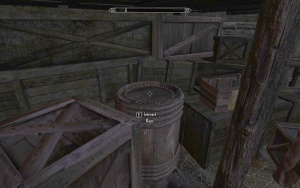 The Rope on the Barrel 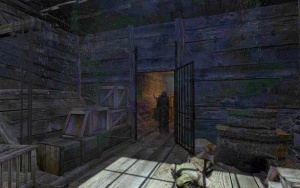 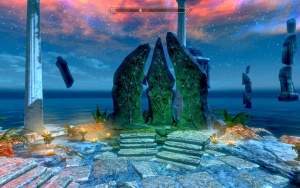 Initial
This dream again ... Will that never come to an end? It haunts me no matter where I am. And whenever I wake up there is this bitter aftertaste, this queasy feeling in the stomach ... perhaps everything changes once Sirius and I arrive.

You awaken from a nightmare as a stowaway aboard Captain Rocio's ship with Sirius. Sirius enquirers about your recurring nightmares, as it is not the first time the dream has haunted the player. While Sirius asks about your race and background, you are able to customize your character.

A couple of sailors enter the cargo hold where you are hiding, and Sirius tells you to extinguish the lantern so that it becomes dark and the sailors might not take notice of you. Unfortunately, his plan fails and you are forced to attack the sailors. Follow Sirius and attack the intruders with your fists until they are knocked out. Remember to charge your punches by holding the attack button. When the fight has finished, Sirius needs your opinion on the prisoners' immediate future.

Whatever your choice about the sailors' lot, Sirius asks for a rope, which you can find just to his left, on the top of a barrel. As you are about to grab the rope, a Veiled Woman appears and tells you that she is sorry but what she is about to do has to be done to make probabilities fall into place.

You awaken again after a strange blackout on the deck of Rocio's ship where the captain is confronting Sirius. Rocio mercilessly kills Sirius as he begs for your lives. Rocio spares you but ties you up and throws you overboard. As you are under water, the voice of the Veiled Woman can be heard again, as she urges you to breathe. Most probably, it is the Veiled Woman who brings you to life.

You awaken after a series of strange visions in "A Strange Place". You are trapped between the worlds and you have to use your Talent to leave the place. Press 'p' and choose your only Talent- meditation. You can teleport to this place or out of this place by using "Meditation". Here you can choose new talents after you level up or have enough talent points.

Press 'z' when "Meditation" spell is active in your favorites and a new quest will be triggered.