Difference between revisions of "Enderal:Taming the Waves" 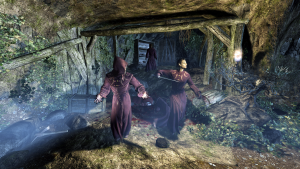 Initial
Constantine said the young mage called Lashiri can heal my Arcane Fever with a "special ritual" and by doing so help me to learn to control my magic without years of meditation. She currently leads an excavation site in the Northern Heartlands called Old Rashêngrad.
After talking with Lishari
Old Rashêngrad was raided by unknown mercenaries - now Lishari and I have to save what can be saved. I need to save as many of the magical stone fragments from the fire as possible and I have to deal with the mercenaries, too. Lishari also wants me to bring her traitorous assistant Sevf to her if I see him.
After finishing the quest
We could save as much as possible from Old Rashêngrad and we managed to extinguish the fire. Lishari tried to use the taming ritual on me, but I reacted unusually strong to her magic. Nevertheless - my magic now should be tamed, which means I am not in a critical condition anymore. Lishari said that I should immediately return to Constantine. 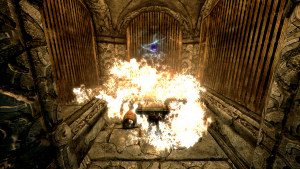 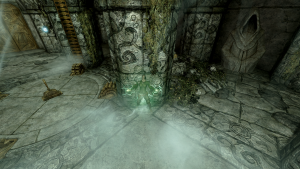 "This will only tickle a bit"

You will receive this quest automatically from Constantine Firespark after The First Steps. Be sure to complete Every Day Like the Last, Part I before doing this quest, or it will fail!

As you enter the ruin, you'll see your quest marker points towards a lower area. As you go there, however, you'll hear a "trigger" noise and Lishari will save you from being exploded into pieces. Go down and you'll find a couple of mercenaries, and then Lishari will ask you to save the remaining stone fragments before they're burnt.

Save the stone fragments

Use the Fire Extinguisher spell Lishari gave to you to extinguish the flames around the marked areas, and be careful, if you take too long, stones will start burning up. In the middle of the way you'll run into Sevf, trapped by the flames. You can choose to extinguish the flames, in which case he'll just teleport away, or let him die, none of which alter the result or rewards of the quest.

After you're done, talk with Lishari (you may have problems with this part, check the Bugs section) and she'll perform the ritual on you, which doesn't go exactly as planned. The quest finishes and the elevator to the surface is unlocked for you.