Difference between revisions of "Enderal:Trails in the Sand" 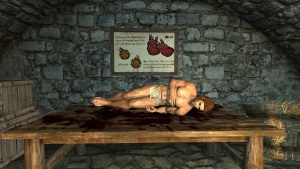 This quest will begin after you turn in The Shortcut to Mendelus Pennypouches. Before he can give you a new job, a courier comes through the door and announces that the guildmaster, Maél Dal'Loran, wishes to speak with you. You can find him at the basement of the Golden Sickle's Guildhouse, where he'll be talking to an apothecarius. Maél will appreciate your hasty coming, then open the door behind him to reveal Rodas' body on top of a table.

Maél explains that traces of what seems to be Kiléan poison were found on the bodies of the caravan. He suspects that the Blue Island Coalition hired the Petrified to attack the caravan and get the artifact that they were carrying, since it originally belonged to the leader of the coalition, and was sold during trying times in the Kiléan war. The guildmaster explains that the poison must be reconstructed in order to properly compare it with the Kiléan poison. He asks that you gather the three ingredients required to reconstruct the poison: Twilight Bloom Sap, Netherland Thistles, and Dust Maggot Prickles.

After you've collected all the ingredients, return to the guildhouse. On your way to Maél, you'll find Dijaam, waiting to also meet with the guildmaster. She'll ask you what you're doing there, and you'll have the option of either lying or telling the truth about Maél's suspicions over her. If you tell her the truth, she'll run over to Maél's office right away. Otherwise, she'll eavesdrop on your conversation with Maél and understand what's going on. Either way, she'll start an argument with Dal'Loran, calling him two-faced for suspecting the Kiléans, and then reporting to the Coalition how the Scarabeus was missing all this time.

If you lied to Dijaam, she'll call you a liar, on the same level as Maél, and you'll lose a lot of sympathy points with her. Maél will then finish your contract and say he'll contact you once more work appears. If you told the truth to Dijaam, Maél will be the one angry at you, and you'll have the option to apologize and keep working for the Golden Sickle, or resign. If you choose to apologize, the quest will end as if you had lied to Dijaam. If you choose to resign, you'll have the option of keeping the ingredients or giving them to Maél, which has no consequence. Then, Maél tell you to leave and see if “that Kiléan whore has some work for you, since you two seem to be getting along”.

No matter how you acted, you'll receive your 500 Pennies payment and the quest will end. A day after the quest has been completed, a courier will give you a letter written by Dijaam, which will start The Last Stone.