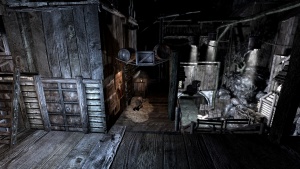 This quest will begin automatically after the end of Qalian's Last Smile. Wait one in-game day, and head over to Tharaêl hideout in the Undercity's Main Cavern. You'll find his Shed at the very start of the Main Cavern: from the signpost where you can fast-travel, go down the stairs and take the first door to the left.

Once you enter the shed, you'll be greeted by Tharaêl, sitting on top of a tall crate. He'll explain that you should follow three basic rules in the Rhalâta temple:

Additionally, he will tell you your cover story: You learned about the lost pages from Rezio Daram, met Tharaêl in the Lost Dog, and reclaimed the pages together.

Follow Tharaêl, and he will lead you to the entrance of the Rhalâta hideout, where Brother Sorrow, The Father's personal bodyguard, will allow you entrance. Once inside, breaking any of the rules Tharaêl outline will lead to decreasing trust by the Rhalâta, which will have an effect later. In special, talking to any NPC, even if they say nothing in response, will cause your trust to fall.

Tharaêl will lead you to the First Seer, who will ask how you learned about the lost pages. Reply with "Rezio Daram", the name Tharaêl gave you as a cover. The First Seer will then ask how you met Tharaêl. Reply saying that you met him the Lost Dog. With that, he will give you a note and direct you to Sister Envy, to collect your 300 pennies reward. When collecting your reward, make sure to not tell Sister Envy how you earned it, or your trust will fall. Once you're done, go back to where the First Seer was.

Tharaêl will try to convince the seer that you are worthy of being part of the expedition set out by The Father. When the seer starts considering you, remain silent, or your trust with the Rhalâta will fall. The seer seems to agree, but wants to test you first: He instructs you to kill Sister Pride, a Rhalâim that deserted. If you ask any questions, your trust with the Rhalâta will fall. As such, it is better to simply accept the job straight away, no questions asked.

Brother Greed will teleport you to the Dark Valley when you're ready, then give you a note explaining that Sister Pride fled into the Lightgrove. In the Lightgrove, you'll have the opportunity to find three letters left behind by Sister Pride. The first letter can be found on top of the altar at the center of the cave, straight ahead from the entrance. The second letter can be found on the ground of a corridor leading away from a study room with many jars and books. The third letter can be found at the very top of the stairwell. You'll have to jump your way up to find the third letter, as the stairs are semi-collapsed.

Sister Pride can be found through a flooded passage at the very bottom of the stairwell. You'll have to dive under the water at the end of the stairwell to find the room where she is. By talking to her you can learn that she developed prosopagnosia, the inability to distinguish human faces, and fled the Rhalâta because she believed that was a result of her weak faith. You can choose to kill Sister Pride and take her heart, or leave her alive and bring Brother Greed another Human Heart. You can find two human hearts in the study room above the ground floor, the one with multiple jars and books stored.

Whichever option you chose, leave the Lightgrove and bring the heart to Brother Greed. Then, go back and talk to the First Seer. You can ask Brother Greed to bring you back to the Rhalâta hideout if you don't want to go there yourself. Once you deliver the heart to the First Seer, he will recommend you to The Father, then tell you to leave the hideout. This quest will end, and Old Wounds will begin.