Milbert Foxhand is a merchant and the protagonist of the side quest 'Divide and Conquer'. He will relentlessly call out for the Prophet's attention near the western gate of Ark's Foreign Quarters. If he succeeds in his efforts and finds an attentive listener, he will divulge the secrets of his grim and bleak past. This will trigger the side quest revolving around his complicated relationship with his sister, Sila Foxhand.

The Road to Ark

According to Milbert, he spent his childhood years in a peaceful coastal village named Foamville with his sister and their parents. The idyll was brutally halted by a bandit raid which resulted in the village's complete destruction and in the death of Milbert's parents. He and his sister narrowly managed to escape the bandits' wrath, and successfully found a safe haven in Ark. Without anyone they knew, they were forcefully directed to the slums of Undercity by the city guard. 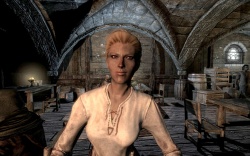 Keeping with the high moral standards instilled into him by his father, Milbert focuses his efforts on earning his living in an honest way. He started a business using some of the money he and his sister managed to take with them when they had fled. Meanwhile Sila started a glimmerdust addiction. Milbert keeps trying to take care of her as best he could, as she is his only family. He even pays her rent to make sure that she has a safe place of her own. Sila’s debilitating addiction to glimmer dust isn't cheap. She is need of a lot of money to buy drugs and these expenses are eating into her and Milbert's meager savings. The money issues and the addiction are causing a lot of bad blood between them. Being desperate, Sila recently hid the key to the safe with their parents' money far from Milbert’s reach and knowledge. Milbert is clearly committed to gaining access to her inheritance due to the fact that the well-being of his business depends heavily on this money. For that reason he urges the Prophet to use any means necessary when handling with his wayward sister. 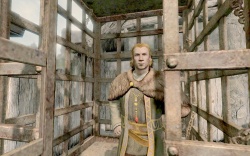 Distraught and frustrated, Sila is determined to finally settle her issues with her brother. It turns out, she is the one behind Milbert’s mysterious disappearance from his usual place in Ark. The clues to Milbert’s whereabouts can be found inside Sila's barracks in Undercity, where she sleeps next to a beautiful landscape picture, which is depicting the siblings’ home village. Over time, the once idyllic village beomces a place of drama and despair, yet again. Both the siblings are to relive the horrors of the raid, look upon their devastated childhood haven and ultimately face the ghosts of their past which are still haunting Sila. In the very central part of the village, Milbert, imprisoned and mocked by his sister, blames his sister’s frantic and deranged behaviour on her addiction. If Sila is killed during ethe encounter, Milbert will seem genuinely shocked and struck by her premature demise. When confronted about being negligent of his sister, he will deny those accusations and dismiss them as by-products of her dust addiction. Concluding, the ruins will be either a place of Sila’s dramatic fall or her bittersweet revenge, depending on your choice. If Milbert is to live and witness his sister's death, he will later plea bereavedly for some time to mourn her.