Ruin of Foamville
View on map 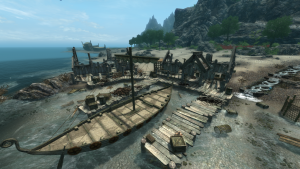 Awoken Lost One, Lost One

Eastern shore of Western Cliff, across from Old Smugger Retreat

The Ruin of Foamville is a small burned down village on the eastern shore of the Western Cliff region. It was raided by bandits, according to Milbert Foxhand, when he was a child. However, it is unclear whether or not the bandits there were the ones who ultimately burned down the village. Now, the village is occupied by Lost Ones.

The village appears to have only consisted of 2 houses and a dock. Most of the loot can be found in these houses. The rock on the north side of the village can play a key role in the combat encounter.

There are 2 houses and a dock with a ship, all of which are outdoors.