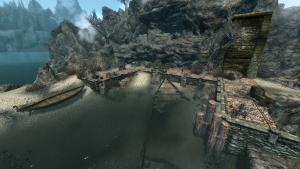 Awoken Lost One, Lost One

Southeastern shore of Western Cliff, directly east from the beach area between the Galleon Wreck and the Ruin of Foamville.

Old Smuggler Retreat is an island near the southeastern shore of the Western Cliff region. As the name suggests, it was likely used at one point by smugglers as a hiding spot. Now, the area is occupied solely by Lost Ones (likely arisen from dead smugglers).

The island is small and rocky, though only the side facing the Western Cliff shore has anything of interest. There are 3 hostile Lost Ones guarding the island, and some loot to be found in the middle.

There are no interiors on the island.