Enderal:A Drop in the Ocean 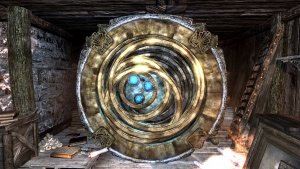 This quest will begin automatically after Lexil's briefing in Forgotten Homeland, Part I. Yuslan Sha'Rim will ask for your help in a personal matter. Go to the top floor of the Curarium, and you will both move to a quieter place, in the Quarters. There, Yuslan explains that he wants your help to find the Planeswalker, a device that allows its user to see other realities in the Sea of Eventualities. The device was created by the same magister who tried to restore Thalgard, and so that's where you'll find it.

Once you arrive at the Destroyed Abbey, you'll have to fight some enemies, and then Yuslan will tell you about the item you're searching for: The Aether Crystal. This crystal amplifies an arcanist's awareness of other eventualities in the Sea of Eventualities, and is an integral part of the Planeswalker. Yuslan will suggest that you search for it in the library.

The lever that opens the room to the crystal

On the library, you'll find a lever at the northern wall of the top floor. Pull it, and a door directly opposite to it on the ground floor will open. Go through the door and you'll find the Aether Crystal, next to a table, on the floor. Once you pick it up, Yuslan will ask how the search went, but after you answer you'll notice that he's not talking to you, but with a mercenary he hired in another eventuality. In this reality, the crystal was smashed by a rockfall before they could acquire it. Angered, Yuslan kills the mercenary after he asks for his pay. Before leaving the room with the crystal, be sure to pick up the Right Horn fragment for the Home of the Forsaken quest, on the table next to where the crystal was.

Head for the exit of the library. Before you can reach it, another eventuality pops up: You, getting killed by a Sunborn with an arrow. Leave the library, and head for the quarters. There, you'll find another eventuality: Yuslan searching for the crystal with Lishari Peghast. Leave the quarters and come back to find the real Yuslan, who will take the crystal ask you to meet him in the Dust Pit in two days.

Wait two in-game days and head for the Dust Pit. Yuslan will tell you that he managed to rebuild to Planeswalker, and will lead you to where it is hidden: In Zorkban's Cellar. The device works by maintaining open the connection between eventualities that is formed when a spell is cast, allowing anyone to pass through them. Yuslan will need your help in casting the correct spell, but before you begin, he asks that you not follow him once you're inside the eventuality. Walk next to him, and you'll join the activation ritual, opening the Planeswalker's portal. 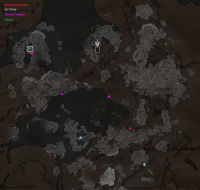 Once inside, Yuslan will again ask that you not follow him. If you have completed Secrets, you can find three Dreamflowers inside of this eventuality: One near the pond, one next to the watchtower, and one next to a palm tree. Be sure to collect at least one of them for later use.

If you choose to respect Yuslan's request and wait for his return, you'll have to wait for 50 in-game minutes (5 real-life minutes), and then you'll be directed to search for Yuslan. The quest will continue the same way, regardless of whether you waited the 50 minutes or followed him straight away. Following the path that he took, you'll come across a house. From inside, you'll hear a happy conversation between Yuslan, his wife, and his daughter. After the conversation is over, you'll find Yuslan sitting on a pier next to the house. He explains that, in this eventuality, his family is still alive, and he is living happily with them.

Yuslan has decided to stay in the eventuality and enjoy that happy moment until he is killed by Arcane Fever. If you have enough Rhetoric, you can convince him to come back peacefully, but if not, you'll have to fight him and force him to come back to your own reality. If you've gained enough Sympathy with Yuslan during the quest, he'll give you the key to vault 1 on the Bank, but if not, he'll give you some pennies and potions.