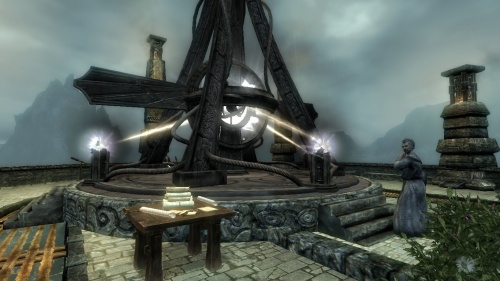 Lexil with the Beacon and the Stones

Initial
Amidst all the bad news there also is a ray of hope: The arcanists found what is missing for igniting the Beacon - energy. We need three ancient artifacts called "Black Stones", which we have to place in the sockets of the Beacon, to provide the needed energy. These stones are legendary jewels which, according Merrâyil, provide their wielder great power but in turn drive them mad. He thinks that the High Ones are also the creators of these stones.
After quest completed
We've made it - thanks to the stones the Beacon now has the energy it needs. But something strange happened at the same time - Archmagister Merrâyil suddenly couldn't cast magic anymore. He fears the worst and asked me to meet Yuslan Sha'Rim in the Nobles Quarters. Yuslan currently erects the barriers which protect Ark from the Nehrimese armies.

This quest will begin automatically after the end of Part of Something Momentous, Part IV. Read Lexil's notes and you'll receive three quests, that can be completed in any order:

After all three stones are inserted, Merrâyil will notice that he can no longer cast magic. This quest will end, and Black Light, Part II will begin.