Enderal:Our Mark on this World 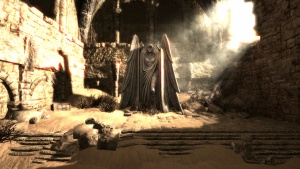 A statue of the Veiled Woman

Esme and the Mercenary

The lever hidden behind the bed

The statuette in the hidden room

The stone plaque from Castle Bleakstar

Esme waiting at the Old Lighthouse

When you first enter the Frostcliff Tavern, you'll find a young aeterna, Esme, talking with a mercenary. Once the conversation is over, you'll be directed to talk with Esme. Ask Esme about her issue with the mercenary, and she asks why you are interested in helping her. If you tell her that you overheard the mercenary talking about being paid, Esme assumes that you're just another sellsword wanting to earn a buck, and dismisses your help. Otherwise, she agrees to tell you more after a game of Battle of Treomar. After two rounds, Esme agrees to your offer for help, regardless of who won the games.

Travel to Esme's camp with her, then light the campfire there. Esme will tell you why she is here: She wants to find Tara, her old romantic partner. Apparently, Tara has always lived with a "Black Fog", that periodically appeared and interfered in her normal life, causing extreme negative emotions, neighboring on depression. One day, she met the Veiled Woman, who told Tara that she should travel to Enderal if she wanted to cure the Black Fog. Tara came to enderal in the Morning Dew, which has run aground. Esme wants you to search the ship and find any information regarding Tara there.

Travel to the Morning Dew and you'll find it half-sunk, crashed into an iceberg. On the top part of the ship, at the deck, you'll find the Passenger Book of the Morning Dew, next to Captain Rocio's body. Take the book and bring it back to Esme. Esme gives you your first payment, 250 pennies, and then schedules a meeting in Ark to find out more about this "Dal'Mercer" that apparently vouched for Tara during the boarding to the Morning Dew. You can choose to meet in the Dancing Nomad on the Foreign Quarter, or in the Fat Leoran in the Nobles Quarter.

A man, Duncan, seems to be investigating Dal'Mercer's front door. Talk to him and you'll learn that he came to break into the house, as it has been abandoned ever since Dal'Mercer disappeared, but the door won't budge, and he can't pick the lock. Examine the door and you'll have a vision: Tara knocking on the door and being greeted by Dal'Mercer, who leads her inside. Right after the vision, Esme finds a spare key in a nearby patch of grass, and says that you two should go inside. Duncan says that he will enter with you, as he arrived first. You can choose to let him enter with you or not.

After you enter the house, Duncan will split off and search on his own, if you let him enter with you. Outside of the thief's earshot, Esme will ask you about your vision, ensuring that the person you saw was really Tara. Head to the room to the north and you'll find a locked door to the cellar, which Esme promptly unlocks. Follow the path and you'll end up at a shrine, protected by a Phasmalist Guardian. Examine the shrine to have another vision: Dal'Mercer introduces Tara to the shrine, then explains that there are seven people in their group, and that they should meet at "the castle". When Tara expresses her fear, Dal'Mercer comforts her by reassuring that now she can finally "be part of something real". Tell Esme about the vision. Tara had talked to Esme about being part of "something real" before, which seems to confirm the vision's veracity.

Head to the south wing of the house, then go up the stairs to Dal'Mercer's room. You'll find a lever cleverly hidden behind the bed. Pull it, and a panel on the wall will open to reveal a secret room. Even if you told Duncan to stay outside, it seems that he has found the secret room before you, and intends to keep everything there for himself. If you have enough Rhetoric, you can convince him to let you take a look around the room to find what you want, with the promise that you'll leave the rest all to him. He agrees, and stands by the entrance of the secret room while you search. Otherwise, if you can't convince him with Rhetoric, you'll have to fight and kill Duncan to continue searching.

Take the Statuette that is on top of a round table at the southwest corner of the room, then present it to Esme. She finds some runes at the bottom of it, but neither of you can decipher them. Esme decides to head over to the museum, to ask the staff there for help in decoding the symbols. Head to the South Quarter and talk to Esme, who is sitting pensively at the edge of the river. She is startled by your arrival, but confirms that the museum is open.

Enter the museum and talk to Merrol Booksnooper. He recognizes the runes and remembers that one of the exhibits has similar carvings, but asks that you find it yourself, because he is busy at the moment. Go to the second floor and examine the stone tablet at the northern end of the room. Esme recognizes the runes, then calls Merrol to examine it. Merrol explains that the tablet was recovered from Castle Bleakstar in the Dark Valley, after the rebels of the Blood Moon Riots died in their last stand there. Esme decides that going there is worth the risk, and asks you to meet her in the Dark Valley's Myrad Tower in a day.

Wait one in-game day and head over to the Myrad tower in the Dark Valley. Esme will be there, waiting for you her in travel gear. She gives you a map to Castle Bleakstar, then starts following you. You can find the right path to the castle by following the signposts present at most intersections. Once you find the entrance of the castle, Esme will try to open it, but a Phasmalist Guardian will appear to prevent that. Once the guardian is defeated, Esme will accidentally drop a coin she found in Dal'Mercer's manor, which seems to deactivate the security mechanism on the door.

Enter the castle and head deeper in. You'll have a vision where Tara is greeted by a woman, who calls her "the seventh", and says that someone will start reading "the tablets" soon. Continue forward until you reach a big central room, with another shrine/statue. The room to the East and the room to the North are blocked, so head to the western passage. You'll end up at a well, which gives you another vision. Two members of the group discover that the river has carried bodies to their well, contaminating the water. One of the members is concerned, given that they waited five years for Tara, "the seventh", to arrive, and so it might be too late now.

Return to the central room and you'll find that the passage to the east has been unblocked. Enter the eastern passage until you reach an assembly room, where you'll have a vision. Members of the group are sitting in a circle while one of them stands in a lectern and reads from the Kadath book. When the vision ends, tell Esme about it. She laments that she couldn't help Tara, but states that you should continue looking for clues as to her whereabouts. Open the strongbox on top of a table at the northeastern corner of the room and you'll find a map, pointing to somewhere on the Powder Desert. Show Esme the map. She says that you two should investigate the place pointed by the map, then uses a teleport scroll to go to Ark and prepare for the journey. Before she teleports, you can tell her that you don't have a scroll to Ark, and she'll give you one.

Wait one in-game day and head to the meeting spot, to the southeast of Duneville. You'll find Esme surrounded by a group of bandits. Once she notices you in the distance, she screams for your help, much for the bandits' dismay. If you have enough Rhetoric, you can convince the bandits to leave without a fight. Otherwise, you'll have to kill them. Once the commotion is over, Esme tells you that a group of seven gray-robed people were spotted in Duneville, where they caused a mess by exploding a bandit that tried to rob them. Then, a group man in the group gave all his money to the miners and they left to a tomb in the north. Since all of this happened only two weeks ago, it's possible that Tara is still in the tomb, and so Esme wants to search for her there.

Enter Old Ishmartep and press forward. The ruin seems to be overrun by Arps, which doesn't bode well for Tara's survival. Continue forward until you reach a large room with spikes and the same statue you saw in Dal'Mercer's cellar, only much bigger. You'll find seven bloody robes in front of the statue, which upsets Esme. Examine the statue and you'll have a vision: The seven members of the group, standing where the bloodied robes are now. Tara, fearing what's to come, tries to run away, but is blocked by the Veiled Woman. The Veiled Woman tries to convince Tara that her death will be part of something greater, and not meaningless as it would be otherwise. Tara says that all her sacrifice will do is continue the Veiled Woman's existence, but the Veiled Woman retorts, stating that she doesn't need the seven's sacrifice to exist. In the end, Tara is convinced by the Veiled Woman, and it appears that she and the six others sacrificed themselves.

Tell Esme about the vision. She is extremely upset by the thought that Tara might be gone forever, and storms out of the ruin. If you have negative sympathy with Esme, the quest ends here. Otherwise, you will be prompted to wait for Esme to calm down. Wait one in-game day and head to Duneville. A courier will give you a message from Esme, which tells you to meet her on the on the Old Lighthouse.

Head to the Old Lighthouse, where Esme is sitting, looking at the vista below. Talk to her and you'll both move to a platform above, looking at an Aurora Borealis during the night. Esme apologizes for her outburst in the tomb, but laments that she couldn't do anything to help Tara. She then gives you the Kas'Tharazeal, a pendant, as a reward for helping her. After the conversation is over, you go back down to the lighthouse, part ways, and the quest ends.