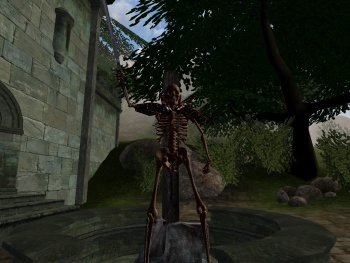 Armonaarth was the most powerful demon lord that Vyn ever produced. He was summoned by Zoras and his Dark Elves. Along with the Dark Elves and his lower servants, Armonaarth destroyed almost the entire continent of Myar. Narathzul, the capital of the Aeterna kingdom of Kallidar, was conquered by him in a single day. After the destruction of Kallidar, the armies of Zoras and Armonaarth sailed to Northforge. Even this country they could conquer quickly. Then only Nursill remained. At first it also looked like a victory for the demons and dark elves, but in the final battle on a smaller island off Nursill, Tarnry eventually defeated them with the support of the Seraphim Armonaarth. However, this was only possible because Zoras betrayed Armonaarth. But Zoras did that only because he found out that Tarnry had given birth to a child. He wanted to know from her where it was. But Tarnry kept it to himself. Although Zoras' act saved him from the death penalty, he was banished anyway. In Northforge he was to live his life forever in solitude. Tarnry became the new queen of Fallas for her actions. She ordered that the new capital of the empire be built on the island where Armonaarth fell. Armonaarth's body was recovered and hung up in front of the palace.