This article is about the Main Quest. For the people, check Emissaries. 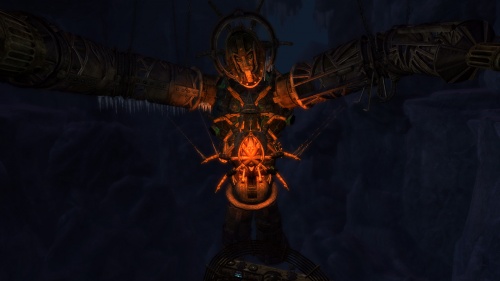 Initial
We have failed. When Arantheal ordered Yuslan to extract the Numinos, Yuslan revealed that he was playing a double game all this time. He was behind the attack in Old Rashêngrad, he killed Lishari when she suspected him and let the Nehrimese in the city together with Bartarr. The reason behind doing all of that: His family died in a massacre called the "Night of a Thousand Fires" in Qyra for which Arantheal was responsible. After Yuslan took his life and by doing so destroyed the Numinos, the High Ones possessed his corpse and ridiculed Arantheal again. Arantheal now is intent on defying them one last time - by igniting the Beacon without the Numinos, hence destroying Ark and much of Enderal. In turn killing himself, the Keepers, Coarek's armies and the civilians which are still alive at the same time.
After meeting the Black Guardian
After Aranatheal [sic] left me behind the veiled woman appeared again - she opened a portal for me which lead to place deep underground. There I met the Black Guardian - a human who combined his consciousness with a machine and is trapped in these caves since eons. He explained the truth behind the Cycle to me: The Cleansing can only be initiated by a human - by igniting the Beacon without the Numinos, its core. All that the High Ones are doing is to manipulate us so that we cause our own downfall. 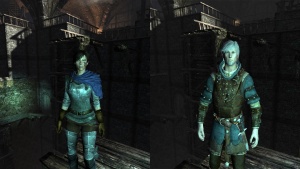 Your companion, waiting for your final decision.

This quest will begin automatically after the end of The Shards of Order, Part II, when the Veiled Woman heals you. You'll wake up to a strange portal in front of the Pyrean Beacon. Walking to the portal, you'll have visions that confirm the worst: Everything that has happened so far is still the same as the Pyreans, including the the traitor destroying the Word of the Dead, and the Emperor deciding to light the Beacon without a Numinos.

Enter the portal and you'll arrive at The Black Guardian's cave. Talking to him will reveal the truth: The Cleansing cannot occur by the hands of the High Ones, it occurs when the Beacon is lit without a Numinos, and all the High Ones do is say the right things to the right people to "nudge" humanity into destroying themselves.

Not only that, but the High Ones have the power to create Emissaries, Fleshless Ones: When a person dies with an unfulfilled compulsion, an uncompleted wish, the High Ones can create a projection of that person, an idealized version of them that is driven only by that compulsion, and is tailor-made for that purpose. These Fleshless ones are very predictable, which makes the High Ones' jobs easier. You, The Prophet and Grandmaster Tealor Arantheal, The Emperor, are such projections. You drowned in the Red Sea with Sirius, and Arantheal died trying to escape his prison in Nehrim.

However, never once in the thousands of iterations that The Black Guardian has witnessed before, has an Emissary ever realized their own nature, as you do now. Talking to him will bring two options: You can escape to the Star City then wait for the next iteration of The Cycle to try to shape a humanity without ego, without weaknesses that the High Ones can pull, or you can go to the Beacon and destroy it, which won't stop The Cleansing in Enderal, will but stop it from spreading further. Either one you choose, The Black Guardian will ask for your help, one final wish: Press the button in front of you to shut him down, and let him finally rest.

Press the button and you'll realize The Black Guardian's deception: You are now exchanging places with him, and you'll soon be stuck in the Goliath. Before that can happen, however, your companion will appear and stop the process. The Black Guardian will be enraged, and will start attacking you. This is the final boss of the game, be prepared.

To destroy The Black Guardian, you will need to destroy the two generators that power him. However, you can only attack the generators once all his "Fleshless Creations" are dead, otherwise your attacks will have no effect and simply bounce back to damage you. Sometimes, a glowing fleshless creation will appear: kill it from a distance, since it will explode it if gets near you or when it dies. You will need to fight at least four waves of enemies to have enough time to destroy both generators.

After the generators are destroyed, The Black Guardian will suffer a magical explosion, and presumably die. Talk to your companion and you'll automatically move back to the Emporium's vault, where you'll need to make your final choice:

Either way, this quest will end after you make your choice.